Early market gains given up in the afternoon

Dow couldn't make it 2 (up) days in a row. It fell 2 (90 below its high at 2PM), decliners over advancers 2-1 & NAZ was off 7 despite all the excitement about Apple (AAPL) earnings & the important product announcement tomorrow. AAPL had shot up to 213 earlier, but settled back to close up 3 at 206. Banks led the markets lower in PM selling, taking the Financial Index thru its important 190 floor. Its sideways performance for almost 6 months shown in the graph keeps haunting me.

Oil & Gold are holding but just under their important floors, 75 & 1100 respectively. 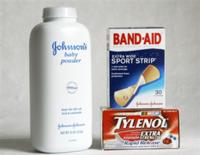 Johnson & Johnson (JNJ), A Dow stock & Dividend Aristocrat, reported profits in Q4 were down, due to sharply lower US sales of high-margin prescription drugs & a $1.1B charge (before taxes) for its biggest restructuring ever. That program will eliminate up to 8K jobs, or nearly 7% of the company's work force (a common theme in many earnings reports). Sales rose 9% to $16.6B, mainly due to new products & a boost of 4.5% from currency exchange rates. But earnings dropped 19% to 79¢ cents per share ($1.02 excluding one-time items). Guidance for 2010 was $4.85 - $4.95 per share, excluding one-time items & the impact of any eventual health care overhaul, lighter than the current range of $4.85 - $5.06. The stock fell 43¢ mostly from weak guidance for this year. As with many Dividend Aristocrats, the shares weren't hurt as badly as others but it also has had a more mild recovery.


The Congressional Budget Office just projected the deficit THIS YEAR will be $1.35T, a shade less than last year's record above $1.4T. Today the Treasury auctioned off $44B of 2-year notes at the 2nd lowest rate on record, 0.88% annualized. Meanwhile, it looks like Bernanke will be renominated to keep his job effective next week. Bloomberg TV counts 49 Senators voting for him vs 16 against with 35 undecided.

The stimulus plan was adopted 49 weeks ago with the promise that unless it was passed, unemployment would go UP TO 8%. Now its 10% & showing no signs of a reversal. JNJ & HD were the 2nd & 3rd Dow stocks, just today, reporting job cuts in 2010. The president will ask for more selective tax relief tomorrow night to stimulate the economy further. That means even more borrowing. Whatever the recovery is, its best description is "fragile."