Markets have worst month since May 2012

Dow fell 30, decliners over advancers & NAZ lost 30.  The MLP index fell 5 to the 436s & the REIT index was off 2+ to 260.  With one minor exception, the MLP index is at its lowest level since mid Mar.  Junk bond funds fluctuated & Treasuries did little.  Oil saw profit taking on easing tensions over Syria & gold fell, paring a 2nd straight monthly gain, on bets that an improving US economy will support the case for the Federal Reserve (FED) to curb its stimulus.

Apple launched a trade-in program in its US retail stores for older models of its iPhone as it gears up for the launch of a new version of the smartphone.  Customers will get a credit for old phones to be used toward the purchase of a new model.  A thriving industry exists for older versions of smartphones, especially the iPhone, on websites.  Even broken iPhones can fetch as much as $125 from vendors, who resell them in the US & internationally.  It has been estimated that the used smartphone & tablet market in the US will reach $14B by 2015.  The stock lost 4+ to 487.

US gov-backed mortgage bonds are heading toward their longest monthly slump since 1999 as concern mounts that the FED will begin paring its debt purchases even as the steepest rise in home-loan rates in at least 40 years slows the housing rebound.  Securities guaranteed by Fannie Mae, Freddie Mac or Ginnie Mae lost 0.33% thru yesterday, heading for their 4th month of declines & bringing losses since Apr to 2.78%, according to Bank of America Merrill Lynch index data.  Investors led by Pacific Investment Management (PIMCO), manager of the world’s biggest bond fund, are bracing for the FED to scale back its stimulus when policy makers meet next month, even after data the past week showed falling home sales & a slowdown in property appreciation.  Average rates for 30-year mortgages reached a two-year high of 4.58% last week.  “We still believe that tapering is going to happen,” said Michael Cudzil, an executive VP who specializes in mortgages at Pimco. “The Fed is looking at the progress seen in the data over a long-term period of time, rather than any one given month.”  Bolstering speculation the Fed will taper are doubts among some policy makers about how effective their balance-sheet expansion has been in boosting the economy and their concern that it may spur excessive risk-taking, he said.  “They’ve done the work preparing markets, and they’ll probably take this as an opportunity to make the move and see how the markets react,” Cudzil said.  The slump in mortgage bonds pushed the average rate offered on new 30-year fixed home loans to 4.51% this week from an almost-record low 3.35% in early May, according to Freddie Mac.  The 35% increase over 17 weeks is the fastest in a comparable period since at least 1972.


China will start trading gov bond futures next week, providing investors with a tool to manage risk 18 years after the derivatives were suspended following a probe into alleged market manipulation.  Trading will commence Sep 6, according to a China Securities Regulatory Commission.  The daily trading limit for the 3% 5-year note as the underlying security is set at 2% on either side of the previous day’s settlement price, according to the China Financial Futures Exchange.  The contracts will help China achieve the central bank’s goal of liberalizing interest rates & deepen financial markets as Premier Li Keqiang tackles slowing growth.  The People’s Bank of China in Jul removed a floor on borrowing costs previously set at 30% below the benchmark, as Li pledged to give market forces a bigger role.  Governor Zhou Xiaochuan said he’s preparing to free up savings rates.  China became Asia’s 2nd-largest gov bond market at the end of 2012, with 7.4T yuan ($1.2T) of notes outstanding.  Gov bond sales were 1T yuan in the first 7 months this year, following total issuance of 1.6T yuan in 2012, according to data from ChinaBond, the gov debt clearing house.  Maturities range from 91 days to 50 years.  The yield on gov notes due 2018 climbed 25 basis points this month to 3.91% on Aug 29, ChinaBond data show.  The rate touched 3.99% on Aug 20, the highest in almost a year.


Stocks concluded a dreary note with another decline.  The Dow lost 200 this week & dropped more than 700 in Aug.  This was a slow month in trading, so movements mean less than at other times.  But even after this decline, Dow is up an massive 4.4K in 2 years.  Sep will have a lot to deal with relating to what the FED decides about bond tapering, financing gov operations, raising the debt ceiling & possible military intervention in Syria.

Like many of you, I’m a huge fan of INO, and from what I have seen so far, their service Marketclub!  This isn’t a stripped down version, everything in MarketClub is available to you. I don’t want to give everything away, but you’ll have unlimited access to my favorite three tools: Trade Triangles, Smart Scan, and Alerts!  The best part is that the MarketClub customer support team will be providing UNLIMITED support!  You can call or email for an instant response to any question, comment or concern.

I’ll get you more info a little bit later, but I’d recommend you jump on this now.

Dow lost 49, decliners ahead of advancers 3-2 & NAZ fell 26.  The MLP index was flat at 441 while the REIT index gained a fraction in 263.  Junk bond funds inched higher & Treasuries were about even. Oil fell for a 2nd day after UK lawmakers defeated a motion for attacks against Syria, reducing the prospect of an imminent strike & easing concern of disruption to Middle East exports.  Gold slid back below 1400. 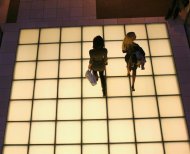 
US consumer sentiment retreated in Aug from last month's 6-year high, though Americans were slightly more upbeat in their outlook than earlier in the month.  The Thomson Reuters/University of Michigan's final reading on the overall index on consumer sentiment slipped to 82.1 in Aug from 85.1 in Jul, but was ahead of an initial mid-month reading of 80.0 & beat expectations for a final read of 80.5.  "Most of the late August gain was due to more favorable income expectations, with consumers expecting the largest income gains in nearly five years, although the median expected increase was just 0.9 percent, less than the expected rate of inflation," survey director Richard Curtin said.  However, households with incomes below $75K grew more pessimistic about the future, & all households expected higher interest rates over the next year & slightly slower growth.  That helped drive the gauge of consumer expectations down to 73.7 from 76.5 & the barometer of current economic conditions slipped to 95.2 from 98.6 in Jul.  Long-term interest rates have risen by more than a full percentage point over the last 3 months on the view that the Federal Reserve (FED) will start scaling back as soon as next month its hefty support for the economy.  That has pushed up mortgage rates.  Economists fear consumer sentiment could weaken if higher interest rates start to slow momentum in a housing revival that has been one of the brightest spots in the overall US recovery.  The one-year inflation expectation fell to 3% from 3.1% while the 5-10-year inflation outlook edged up to 2.9% from 2.8%.

Consumer Sentiment in U.S. Fell Less Than Forecast in August

US consumers barely increased their spending in Jul as their income grew more slowly, held back in part by steep gov spending cuts that reduced federal workers' salaries.  The tepid gains suggest economic growth is off to a weak start in Q3.  The Commerce Dept said that consumer spending rose just 0.1% in Jul from the previous month, slower than the 0.6% increase in Jun.  Consumers cut their spending on long-lasting manufactured goods, such as cars & appliances, but spending on services was unchanged.  Income rose 0.1% in Jul following a 0.3% gain in Jun.  Overall wages & salaries tumbled $21.8B from Jun, a third of the decline came from forced furloughs of federal workers.  Several analysts said that economic growth is unlikely to match the 2.5% annual rate reported for Q2 which was more than double the growth rate in Q1 & above an initial estimate of a 1.7%.  The FED will consider the consumer spending & income data at its Sep meeting, when it decides whether to begin slowing its $85B a month in bond purchases.  The bond purchases have helped keep long-term borrowing rates low.  The most critical factor that the FED will weigh is the Aug employment report, which will be released next Fri.  Another concern is that rising interest rates could dampen consumer spending, particularly on homes & cars. Mortgage rates have already risen more than a full percentage point since May.  The small rise in spending was driven by a 0.8% gain in purchases of nondurable goods, such as clothing.  Purchases of durable goods such as autos fell 0.2% & purchases of services such as utilities & doctor's visits were unchanged in Jul.

Consumer Spending in U.S. Rises Below Forecast on Incomes

Verizon, a Dow stock, is in talks to acquire UK partner Vodafone’s (VOD) 45% stake in Verizon Wireless in what would be the biggest deal in more than a decade.  The carriers are in advanced discussions about a sale of the holding for about $130B.  VZ is working with several banks to raise $10B from each, or enough to finance about $60B of the buyout & an announcement could come as early as Mon.  The acquisition would give VZ full ownership of the most profitable US mobile-phone company, ending a partnership of over a decade that has paid billions in divs to VOD.   At $130B, almost the entire market value for VZ, the deal would be the biggest since Vodafone’s acquisition of Mannesmann in 2000 & would give the UK carrier’s finances a boost in reviving its European businesses hurt by the region’s debt crisis.  As part of the transaction, VZ will probably sell back to VOD its 23% stake in Vodafone Italia, which could be worth about €4B ($5.3B).  VZ stock fell 34¢.

Verizon in Talks With Vodafone for Full Wireless Control

Stocks are meandering on more light trading.  UK politicos are waffling about striking Syria & the US pres is taking their lead.  No one is sure what it do in a difficult situation, so it looks like nothing will be done.  The jobs report on Fri & then the FED meeting 2 weeks later will move the stock market.  Sep is statistically, the worst month for stocks.  Dow is down 700  in Aug in what should have been an uneventful month for what is supposed to be a recovering economy.