Dow climbed 50, advancers ahead of decliners 3-2 & NAZ gained 5.  MLPs are having another big day, taking the index up 4+ to the 453s, & the REIT index went up 1 to the 272s.  Junk bond funds were higher & Treasuries pulled back.  Oil is headed for a 6th weekly decline, the longest stretch of losses in 15 years, as rising US supplies countered speculation that the Federal Reserve will maintain stimulus of the economy.  Gold inched  higher. 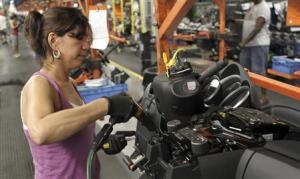 US industrial production unexpectedly fell in Oct as output at power plants & mines declined, but a 3rd straight month of gains in manufacturing suggested the economy remained on a moderate growth path.  Industrial output slipped 0.1% last month after advancing 0.7% in Sep, the Federal Reserve (FED) said.  The drop in Oct was the first since Jul.  The  forecast called for a gain of 0.2%.  Manufacturing output increased 0.3% even as automobile assembly fell for the first time since Jul.  Manufacturing output, which had edged up 0.1% in Sep, was supported by gains in the production of primary metals, furniture & computer & electronic products among others.  The sector is regaining some momentum after hitting a soft patch early in the year.  Utilities output fell 1.1% last month after surging 4.5% in Sep.  Mining production contracted 1.6%, the first drop in 7 months.  The FED attributed the fall to temporary shutdowns of oil & gas rigs in the Gulf of Mexico as Tropical Storm Karen approached.  Last month, the amount of industrial capacity in use fell 0.2 percentage point to 78.1%.  Industrial capacity utilization, a measure of how fully firms are using their resources, was 2.1 percentage points below its long-run average.

Factory Output in U.S. Rose More Than Forecast in October

Kimberly-Clark, a Dividend Aristocrat, plans to spin off its health-care business, leaving management to focus on its consumer & professional brands.  The tax-free deal would create a stand-alone, publicly traded company with about $1.6B in sales.  The unit that would be separated makes products such as sterile wraps, surgical face masks & catheters.  About 70% of its sales last year were in North America, with most of the rest in Europe & Asia.  In Q3, revenue rose after the division posted declines in the previous 4 qtrs.  The intent to separate its health-care unit contrasts with rivals that are seeking to deepen their operations in the market.  Robert Abernathy, group president for Europe, global nonwovens & continuous improvement & sustainability, will be CEO of the new health-care company if the spinoff is completed.  Abernathy joined in 1982 & has held senior management positions, including having overall responsibility for the health-care business from 1997 to 2004.  The health-care division posted a 4% increase in sales in Q3 on a currency-neutral basis, lower than the companywide 5% sales gain on that basis.  Last year, the unit accounted for 7.7% of the company’s $21.1B in sales.   The outlook for the division is more unpredictable, CEO Thomas Falk said.  “We’re all trying to figure out, in North America in particular, what’s going to happen from a health-care spend overall, what’s going to happen with procedures,” Falk said.  “There’s probably a little bit more variability around our outlook for that business going forward.  KMB stock slid pennies.

China pledged the most sweeping changes since the 1990s to the Communist Party’s policies, vowing to ease the one-child policy, expand farmers’ land rights & allow more private investment in state industries.  Couples may have 2 children if either parent is an only child, according to a party policy decision.  The document, covering 60 measures, fleshes out a communique issued Nov 12 after a 4 day conclave & sets a 2020 goal for implementation.  The announcement builds on promises to elevate the role of markets while keeping the state in a “dominant” position.  China is seeking to balance finding new sources of growth with sustaining the Communist Party’s grip on power as President Xi Jinping faces challenges from debt to demographics.  The family-planning policy was put in place in 1979 to alleviate poverty.  It has saddled the nation with a declining labor force & an aging population.  The UN has estimated that the number of 15-24 year-olds, the mainstay of factories that drove growth for 2 decades, would shrink by 67M by 2030.  The reforms are the biggest since the late 1990s.


There is nothing special going on in the markets, but the path of least resistance is higher.  Yesterday, the pres had a news conference where he waved his hands, trying to make the Obamacare crisis go away.  It didn't go away, but insurance companies, demonized as the "bad guys," are under pressure to perform miracles in 30 days.  They said they can't which will bring even more confusion into what is a horrible mess.  Somehow companies are supposed to ignore all this uncertainty & make business decisions about the future.  Today I saw the first ads for  Black Friday sales (2 weeks early).  Retailers may have a rough time during the holiday season.  But the Dow is not worried as it makes an assault on 16K.  It's already up more than 2.8K YTD.  That's a monster rally with minimal economic data to support.