This Undervalued Energy Stock Is Set To Soar!
Access this FREE report before it is too late!

The US economy expanded at a slower pace than forecast in Q4 as cooling business investment, a slump in gov outlays & a widening trade gap took some of the luster off the biggest gain in consumer spending in almost 9 years.  GDP grew at a 2.6% annualized rate after a 5% gain in Q3 that was the fastest since 2003, according to the Commerce Dept.  The forecast called for a 3% advance.  Consumer spending, which accounts for almost 70% of the economy, climbed 4.3%, more than projected.  Swept up by the cheapest gasoline in years & the biggest employment increase since 1999, households are gaining the confidence to spend more freely, which will bolster the economy.  The gain in household consumption was the biggest since the Q1-2006 & compared with a 4% forecast.  It followed a 3.2% advance in Q3.  Purchases added 2.9 percentage points to growth.  For all of 2014, the economy grew 2.4% from the year before, the most in 4 years & followed a 2.2% advance in 2013.  Consumption climbed 2.5%, the most since 2006.  Fixed business investment increased at a 2.3% annualized rate, compared with a 7.7% gain in Q3.  Corp spending on equipment dropped at a 1.9% pace, the biggest decline since Q2-2009.  The trade deficit widened to $471B, as imports climbed 3 times faster than exports.  The gap subtracted 1 percentage point from GDP.  A surge in inventories helped make up for some of the shortfall in trade.  Stockpiles grew at a $113B rate, an increase of $31B from Q3, adding 0.8 percentage point to growth.  Gov spending decreased at a 2.2% pace, subtracting 0.4 percentage point to overall growth as defense spending slumped by the most in 2 years.

Visa earnings beat estimates for the fiscal Q1 & announced a 4-1 stock split.  EPS were $2.53, above the 2.49 estimate.  Revenue grew 7%% over year to $3.38B, compared to the estimate of $3.34B.  "While the challenges of the macro global environment don't seem to abate, our results have remained consistent and reflect the strength and underlying resilience of our business model," CEO Charlie Scharf said.  "Our focus remains squarely on investing in our long-term strategic initiatives, driving new technologies and ways to pay as we continue to work collaboratively with governments, issuers, acquirers, and merchant partners."  The stock jumped 11.25.  If you would like to learn more about Visa, click on this link:
club.ino.com/trend/analysis/stock/V?a_aid=CD3289&a_bid=6ae5b6f7 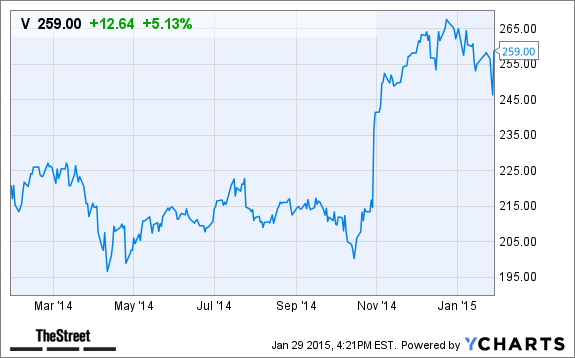 Finance Minister Yanis Varoufakis said Greece won’t seek an extension of its bailout agreement, setting the gov on course to enter Mar without a financial backstop for the first time in 5 years.  Greece won’t engage with officials from the troika of official creditors who have been policing the conditions of its rescue since 2010.  It wants a new deal with the EU that allows for more spending, Varoufakis said at a joint press conference with Eurogroup Chief Jeroen Dijsselbloem.  “We don’t plan to cooperate with that committee,” Varoufakis said. “The Greek state has a future, but what we won’t accept has a future is the self-perpetuating crisis of deflation and unsustainable debt.”  The standoff could see Greek banks effectively excluded from ECB liquidity operations & the gov with no source of funding, having rejected EU aid while still shut out of intl markets.  Greek bonds tumbled, with the yield on 3-year gov debt rising 148 basis points to 18.76%.  The stock market reversed earlier gains to close 1.6% lower.  The Greek gov wants a new plan to focus on combating corruption & boosting public investment instead of cutting the deficit.


The GDP data upset traders, although money managers are also adjusting month end portfolios.  Greek bond yields had soared to low grade junk status as the new gov wants to dictate terms for another bailout.  The MidEast is becoming more scary.  The  US economy is outperforming the rest of the world although the strong dollar is hurting results for multi-natonals.  Dow is down more than 500 in Jan & unlike last year, there might not be a strong rebound in the next few months.