Markets are lower ahead of new week for earnings

Dow fell 52 from its yearly high, decliners ahead of advancers almost 3-2 & NAZ dipped 4.  Bank stocks slipped, taking the Financial Index into the red in the last hour.

The MLP Index rose another 1+ to the 386s, setting a new record high while the REIT index fell pennies in the 241s (a multi year high).  The REIT index is up 6.3% YTD, slightly lagging the Dow.  Junk bond funds were off a penny or 2, near multi year highs, & Treasuries were flattish ahead of a $99B auction this week.  Oil dipped a little but near its yearly highs while gold reached near record levels on the weak dollar (the weakest since the Financial crisis in 2008).

More people bought new homes in Mar, giving the battered industry a small lift after the worst winter for sales in almost a half-century.  The Commerce Dept said new-home sales rose 11% last month to a 300,000 annual pace, following 3 straight monthly declines. But it remains far below the 700K pace viewed as healthy.  Last year was the 5th consecutive year of declines for new-home sales, it could take years before sales return to a healthy rate.  Poor sales of new homes mean fewer jobs in the construction industry. Each new home creates an average of 3 jobs for a year & $90K in taxes, according to the National Association of Home Builders. 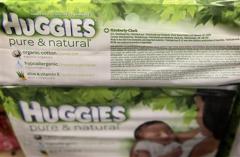 Kimberly-Clark (KMB), a Dividend Aristocrat, reported Q1 net income fell 9%, from the rising costs of pulp, oil & other materials.  To fight back, it will raise prices & cut costs.  KMB also lowered the low end of its expectations for full-year earnings because of uncertainty about how much costs will climb.  EPS was 86¢, down from 92¢ last year.  Excluding one-time items, EPS was $1.09 below expectations of $1.17.  The bright spot was sales, overseas markets including Asia & Latin America were strong, though competition there will be fierce.  Revenue rose 4% to $5B. KMB expects sales to keep growing, & raised its predictions for 2011 growth.  KMB guided that excluding restructuring costs, EPS will be at least $4.80, compared with a previous minimum of $4.90. Analysts were expecting $4.95 on average.  The stock fell 2.46 & yields 4.4%

RadioShack (RSH) Q1 earnings fell on weakness in its T-Mobile business & higher costs, prompting it to cut the top end of its full-year profit outlook. Sales at company-operated stores & kiosks open at least a year fell 0.6% in Q1 because of weak T-Mobile postpaid wireless sales.  In Feb, RSH said T-Mobile's product offerings were not competitive with those of other carriers. It reduced the top end of its 2011 outlook for EPS to $1.80 from $1.90, while keeping the low end at $1.60. RSH expects sales to rise at a low-to-mid single-digit percentage rate.  In Q1 EPS was 33¢, down from 39¢ a year earlier.  The results also included costs of 2¢ from early retirement of debt.  Sales rose 2.1% to $1.06B.  The stock was down 19¢.

Weaker markets were to be expected.  Including today's loss, Dow is still up over 100 in the last week.  Initial earnings today are not encouraging.  Amazon (AMZN) was down fractionally in the 185s ahead of its earnings (Tues after the market close).  MLPs keep rising, taking their yields below 6%.  Gold continues to surge (up 1% YTD) on the weak dollar & a high level of tensions in the world.

Get your favorite symbols' Trend Analysis TODAY!
Click Here
Posted by Avi at 11:33 AM