Dow added 47, advancers ahead of decliners 2-1 & NAZ was up only 1 (held back by a weak Microsoft).  Bank stocks, traditional market leaders, were flattish.

The Alerian MLP Index was at historical record levels after rising another 10 in Apr.  The Dow Jones REIT Index gained an impressive 12 in Apr.  Junk bond funds did well & Treasuries had their biggest monthly return since Aug as cooling economic growth & the Federal Reserve commitment to sustain monetary stimulus spurred demand for the safety of gov debt. Oil rose, capping an unprecedented 8th straight month of gains, as better-than-expected consumer spending signaled fuel demand may climb. Gold approached $1570, extending a rally to new records, on bets that the dollar will extend a slump.  Its chart below shows strong gains in just the last 3 days (green line is today). 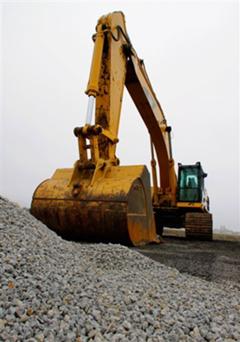 Caterpillar, a Dow stock, reported Q1 profit soared more than 5-fold & raised its financial outlook for the year as a growing economic recovery boosted demand for mining & construction equipment.  Companies have been holding back investments but now have no choice but to replace aging machinery, boosting CAT sales.  EPS was $1.84 , up from a depressed 36¢ last year & revenue rose 57% to almost  $13B.  Analysts had expected earnings of $1.30 a share on revenue of $11.4B.  Based on these results CAT boosted its 2011 outlook, forecasting revenue of $52-54B & EPS of $6.25-6.75. It previously forecast revenue above $50B & EPS of roughly $6.  The projection does not include its recent acquisitions of MWM Holding or Bucyrus International because the deals haven't closed yet.  The stock rose 2.77 to the 115s after an excellent run off recession lows.

Simon Property reported Q1 results jumped 75% on higher operating income, an improving economy & recent acquisitions.  The country's largest mall operator also increased its full-year financial outlook which fell in line with estimates by analysts.  Funds from operations (FFO) per share rose $1.61 from 94¢ last year.  Expectations were for FFO of $1.53.  Excluding charges for paying off debt, adjusted FFO was $1.41.  Revenue grew 10% to $1B.  The company estimates 2011 FFO of $6.55-6.65, up from $6.45-6.60 previously given. Analysts had forecast $6.61.  The stock lost 48¢.

The average price for gas is up to $3.91, getting sooo close to the record $4.11 in 2008.  WalMart (WMT) said today that their customers are getting squeezed by the price rise.

This has been a spectacular Apr.  To say the earnings reports were well received is an understatement.   Worldwide problems are being ignored.  While stocks are climbing, gold & Treasuries were also strong with gold reaching new records.  This disconnect that can not last (although the 2 have gotten along fairly well in recent months).  Dow gained an amazing 1500 in Apr, hardly chump change.  Earnings season is winding down, maybe that will bring a change in fortunes.  Last year Apr was a good month, extending a longer term gain.  But May saw major selling because of European debt problems.  But this is a new year with different rules.