Stocks keep climbing.  Dow was up 30 to a new 2½ year high, advancers ahead of decliners 3-2 & NAZ was up 6.  Bank stocks were also strong but the Financial Index has been flat over the last month.

The Alerian MLP Index rose a fraction to the 382, just 1 under its record reached a month ago, while the REIT index continued flat at 237.  Junk bond funds inched higher & Treasuries were weak.  The yeld on the 10 year Treasury bond rose 3 basis points to 3.52% (its highest level in a month).  Oil prices held near a 2-1/2 year peak, supported by unrest in the Middle East & North Africa & dollar weakness ahead of an expected European Central Bank interest rate increase.  Gold gained to a record for a 2nd day as rising inflation spurred demand for an investment haven & the dollar slumped against the €. 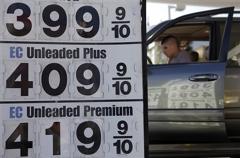 Rising oil prices are threatening to halt US economy's gains.  Partly because of flat wages, households have been struggling to pay higher gas prices.  The average for gas was $3.71 yesterday, according to AAA (up 88¢ from a year ago).  Airlines, shipping companies & other US businesses are being squeezed. The rising prices are further straining an economy struggling with high unemployment & a depressed housing market. Unlike other kinds of consumer spending, gas purchases provide less benefit for the economy as about half the revenue flows to oil exporting countries like Saudi Arabia & Canada.  For consumers, more expensive energy siphons away money that would otherwise be used for household purchases, from cars & furniture to clothing & vacations. Two-thirds of Americans say they expect rising gas prices to cause hardship for them or their families in the next 6 months, according to a new Associated Press-GfK Poll. 71% say they're cutting back on other expenses to make up for higher pump prices & 64% say they're driving less. 53% say they're changing vacation plans to stay closer to home.  Rising fuel prices are pinching businesses too.  It has been estimated that higher oil prices shaved 0.5% from growth rate in Q1 & will likely have a larger negative impact in Q2. 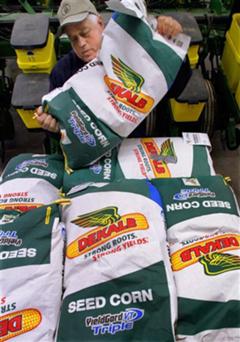 Rising corn seed sales helped boost Monsanto (MON) fiscal Q2 profits, climbing 15% above last year as corn seed revenue jumped 7%. The company is rolling out more expensive brands of genetically altered corn seeds & is competing fiercely for market share against other seed developers.  Earnings beat estimates but its forecast for the year was below expectations.  EPS rose to $1.88 for the qtr ended Feb 28 compared with $1.60 a share, a year ago.  Revenue increased 6.2% to $4.13B (including $2.4B in corn seed revenue).  Analysts expected earnings of $1.84 on revenue of $4.15B.   The company affirmed full-year earnings forecast of $2.72-2.82 on an ongoing basis & $2.66-$2.79 on an as-reported basis. But analysts expect EPS of $2.85.  The stock fell 3.23 to 70.

The Toyota Prius hybrid has become a mainstream vehicle in the US.  Toyota (TM) announced that it had passed the million sales milestone, helped by brisk sales recently as US gas prices continued to rise toward $4 per gallon.  The Prius, powered by both a gas engine & an electric motor, gets an estimated 51 MPG in the city & 48 on the highway. Aside from electric vehicles, it is the most fuel-efficient car in the US, according to the Environmental Protection Agency. TM began selling the Prius 11 years ago when gas prices were low. In Q1, TM sold nearly 43K, 52% more than last year, according to Autodata. In 2010, the company sold more than 140K.  Worldwide sales topped 2M last year & TM said its total global hybrid vehicle sales passed the 3M mark last month.  TM fell 13¢.

This is another quiet day but there is little selling.  MLPs are red hot again & just a whiff of wind will bring the index to a new record high (although the yield has been reduced to 5.9%).  Gold, however, is the hottest investment & its strength during these times of trouble around the world does not send positive signals for further advances in stocks even though both have been advancing for months.  They're not supposed to advance at the same time..

Get your favorite symbols' Trend Analysis TODAY! C
lick Here
Posted by Avi at 10:34 AM