Dow fell 30, decliners ahead of advancers 5-2 & NAZ was off 24.  Bank stocks are leading selling in the markets.

The MLP index fell 2+ to the 368s & the REIT index was down 2 to the 227s.  Junk bond funds were flat & Treasuries rose slightly.  Oil rose to a 3-month high on the prospect of new political leadership in 2 of Europe’s most financially hard-hit countries.  Gold rose to a 6-week high as Europe's escalating sovereign-debt crisis spurred demand for a haven. 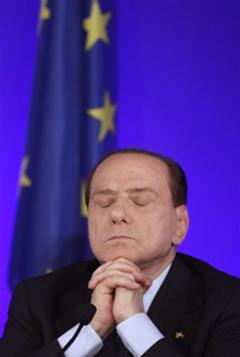 Sadly, nobody has a clue what's going on in Europe.  Pressure mounted on Premier Berlusconi to resign so a new gov could pass the economic reforms Italy needs to avoid financial disaster, as the country's borrowing rates spiked & talk of early elections intensified.  The premier denied persistent reports that he was considering stepping down, saying they were "without foundation."  Italy has become the new focus of the eurozone debt crisis as its debts are huge, its growth is slow & its economy is too large to bail out.  There is growing concern that Berlusconi is the problem because he no longer commands enough loyalty in his own coalition to pass the reforms after his coalition gov has suffered defections & the possibility of early elections is growing.  The ultimate fear is that Italy cannot pay for its enormous €1.9T ($2.6T) debt & needs intl help.  During a G-20 summit last week, Berlusconi had to ask the IF to monitor the country's reform efforts, a humiliating step for the euro-zone's 3rd largest economy.


France isimposing tax increases & spending cuts amounting to €7B ($9.6B) for next year to defend its AAA credit rating as growth slows & the debt crisis in Europe deepens.  The austerity plan is the 2nd announced by the gov since Aug, when €11B of budget tightening was set out. The presidential elections will be in 6 months & Moody’s & S&P have signaled that France’s credit rating may be at risk.  These measures will trim the budget gap by €11.6B in 2013, when the gov forecasts 2% growth.  France wants to reduce its deficit to 4.5% of GDP in 2012 from this year’s estimated 5.7%.  This is just another whopper size problem that Euro leaders have to deal with. 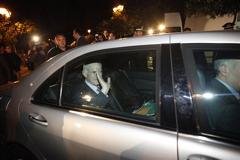 The leaders of Greece's 2 biggest political parties were in talks to choose the head of a new interim gov, after reaching a historic power-sharing deal to accept a massive financial rescue package & prevent imminent bankruptcy.  Socialist Prime Minister Papandreou & conservative leader Samaras held fresh negotiations to hammer out the composition of the new 15-week gov.  The new administration will be tasked with passing the €130B ($179B) package, agreed by intl creditors on Oct 27 (but cuirrently frozen), before elections.  European govs want concrete progress by the evening, when eurozone finance ministers meet to discuss the crisis. This is a mess & I have said many times before, nobody knows where this will lead.


The confusion levels coming out of Europe rival the financial meltdown 3 years ago.  But this time the markets are taking the confusion fairly well.  Not only are the markets holding but gold & Treasuries are getting only limited interest from money that seeks safe haven investments.  The Greek drama will drone on & now there is a lot to get nervous about regarding Italy.  Meanwhile the supercommittee in DC is working on its report to cut federal deficits & reports are that there is little agreement on the committee.  Overall, the huge global debt mess is being taken well by traders.

Get your favorite symbols' Trend Analysis TODAY!
Click Here
Posted by Avi at 11:26 AM