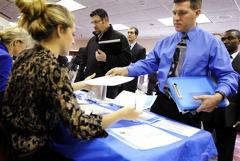 The American economy added 80K jobs in Oct, the smallest in 4 months, but job growth in the 2 previous months was much stronger than first thought.  The private sector added 104K jobs.  The unemployment rate dropped to 9% from 9.1%, the first time it has fallen since Jul & the lowest rate since Apr.  Expectations were for a gain of 100K jobs.  The Labor Dept said the economy added 102K more jobs in Aug & Sep than first thought & the ranks of the long-term unemployed fell sharply to 5.9M.  The number of discouraged workers fell & fewer people with part-time jobs were looking for full-time work.  This is another report with mixed messages about unemployment, although it's well short of being favorable.

Leaders of the world's 20 most powerful economies failed to agree on how to increase the firepower of the IMF so that it can help stem the European debt crisis, though they acknowledged its resources should be boosted.  The meeting in France has been overshadowed by Greece's political turmoil & worries about Italy, which accepted IMF supervision of its economic reform efforts.  "It's important that the IMF sees its resources reinforced," Jose Manuel Barroso, the president of the European Commission, said.  He added that increased resources would be there to help countries around the world, not just the eurozone, indicating Europe is struggling to attract extra help from its global partners for its debt crisis.  The IMF may also decide to issue more special drawing rights, SDRs, the fund's own reserve currency that can be exchanged for cash with central banks around the world.  SDRs can just be created & do not require new commitments from IMF member states.  Finance ministers will now have to work out the details of how to boost the IMF resource. No surprise, little was decided on solving complex intl financial issues.


Groupon (GRPN) stock soared nearly 40% after its IPO.  Even in unsettled markets, there is strong demand for an internet company whose business model is considered unsustainable by some.  The stock jumped $7.86 to $27.86.  GRPN sends frequent emails to subscribers offering a chance to buy discount deals for anything from laser hair removal to weekend getaways. The company takes a cut & gives the rest to the merchant.  5½% of the stock was sold to the public, less than many prominent tech companies sold in recent years.  The IPO price gave GRPN a market value of $12.7B.


The jobs report was pretty much what was expected.  The data was inconclusive, but tells us that the economic recovery is still just sputtering.  The G-20 meeting is getting little accomplished, again to be expected.  The Greek debt mess drones on with seemingly no end in sight.  The stock market is taking this dismal news scenerio fairly well.  Dow is only about 300 below its recent highs, after rising 1600 from its lows.  This week Dow is down 200, pretty much today's decline.  European financial problems (sovereign debt issues & slumping economies) will be around into next year.