Stocks were modestly under water until the last hour when the sellers took control.  Dow fell 76, decliners over advancers 5-2 & NAZ had its gains cut back to loss of 7.  Banks led the selling & the Financial Index is down 10 from its interim high reached on Mon.  As indicated below with other figures, "risk averse" is creeping back into investor thinking.


MLPs saw profit taking as the index pulled back 1½ to 331, still up 46 YTD (16%).  The Dow Jones REIT Index fell 5½ to the 207s, down 12 from its yearly high on Mon (but up 14% YTD).  Junk bond funds were higher, near or at their yearly highs.  Increased investor nervousness took the VIX up 1+ to the 23s.  A stronger dollar brought the € down a penny to $1.33.  The big news was more strength in Treasuries.  The yield on the 10 year Treasury bond fell 7 basis points to 2.55½% & the yield on the 2 year note is at its record lows of 0.42%.  Buyers in 10 year Treasuries were hoping the Federal Reserve will start buying those bonds.  Worriers holding 2 year notes will receive less than $9 interest in 2 years from their $1000 note, not a good sign for the stock markets! 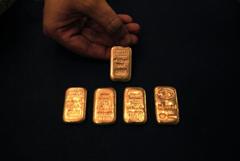 
Oil rose had a modest rise as the index of US leading indicators beat estimates in Aug & existing home sales grew, giving traders an excuse to buy.  Gold held near record highs with $1,300 in sight.


General Motors probably will only seek to raise $8-10B in its IPO in Nov, much less than originally targeted because the Treasury, which owns 61%, is more interested in fetching a higher share price to eventually recoup its almost $50B investment. GM & its investment banks have been considering a deal as large as $16B.  Since the idea of an IPO was announced in Aug, markets have seen investors become more nervous resulting in this lower evaluation.


Apple (AAPL) overtook PetroChina (PTR) to become the 2nd biggest company in the world by market cap.  APPL, valued at $266B, trails Exxon Mobil (XOM), worth $313B (PTR is valued at $265½B).  AAPL bulls see the stock going higher but I am worried about increased competition surfacing for its sexy new products.  The stock was up a fraction in the 288s after reaching 292s for another record.

The bulls were in command & the Dow had an opportunity to show it was heading for new heights.  But the bulls were turned back by uncertainty.  The personal tax situation for next year is starting to weigh on investor minds.  Of course, dreary economic numbers, like those of jobless claims & housing, are not going away soon & keeping investors from committing to stocks.  There is this odd situation when Treasuries are at or near record prices while gold & AAPL are at records!  This relationship will not last.

My host, Blogger (part of Google), brought changes to our blogs.  This is the first time I'm working with them.  I'm getting used to the changes, hope you like them.

Find out what's inside Trend TV!!
Click Here
Posted by Avi at 4:42 PM

Thanks for your articles on your blog. Your insights on Apple's growth and future were thought-proving and well-researched. Based on posts like this, I'd love to extend you an invite to join the Wikinvest Wire, an exclusive, invitation-only blog network.

The Wikinvest Wire connects your posts with related finance and investing blog posts across the web giving you increased syndication for your content and related reading for your users.

To find out more about the Wikinvest Wire, please visit the Wire's About page. If you're interested in joining the Wire, let me know and I'll send you an invite code that will allow you to register and download the plugin for your blog. Thank you and keep up with the great posts!
http://www.wikinvest.com/blogger/Wikinvest_wire

I forgot to mention that you can contact me at akshita@wikinvest. com.