Lower markets ahead of earnings

Dow dropped 48, decliners over advancers 3-2 & NAZ lost 7.  The Financial Index fell 1+ to the 228s, still near its yearly high.  The MLP index rose another 2+ to the 407s, just 4 below setting a new record high, & the REIT index slipped a fraction to 272.  Junk bond funds were mixed & Treasuries inched higher.  Oil & gold did little. 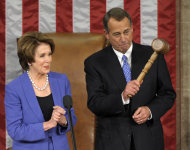 Struggling for the upper hand in the next round of debt talks, Reps & Dems this weekend drew lines in the sand they said they'd never cross when it comes to the US debt limit.  The tough talk on talk shows doesn't bode well for voters who are frustrated by the political gridlock.  "I believe we need to raise the debt ceiling, but if we don't raise it without a plan to get out of debt, all of us should be fired," said Sen Lindsey Graham.  Last week's deal to avert the combination of end-of-year tax increases & spending cuts left some other major pieces of business unresolved.  By late Feb or early Mar, the Treasury will run out of options to cover the nation's debts & could begin defaulting on gov loans unless Congress raises the debt ceiling.  Also looming are deep automatic spending cuts expected to take effect at the beginning of Mar that could further erase fragile gains in the US economy.  Then on Mar 27, the temporary measure that funds gov activities expires, & congressional approval will be needed to keep the government running.  That's one more chance to fight over spending.  Reps say they are willing to raise the debt ceiling but insist any increase must be paired with significant savings from Medicare, Medicaid & other gov benefit programs.  Obama has said he's willing to consider spending cuts separately but won't bargain over the gov borrowing authority.  "One thing I will not compromise over is whether or not Congress should pay the tab for a bill they've already racked up," Obama said.  This looks like a series of ugly fights.

Bank of America, a Dow stock, announced almost $12B of settlements with mortgage finance company Fannie Mae & a $1.8B sale of collection rights on home loans, in a series of deals meant to help the bank move past its disastrous 2008 purchase of Countrywide Financial Corp.  The settlements & transactions, & other charges will result in BAC posting only a small profit in Q4.  BAC is paying $3.6B to Fannie Mae & buying back $6.7B of bad loans from the mortgage company to clear up all claims that Fannie Mae had made against the bank.  Most of the settlement would be covered by reserves, & another $2.5B, before taxes, that it set aside in Q4.  The stock was up pennies.

Mario Draghi of the ECB will turn his attention to nursing the euro region back to economic health this week as the urgency to deploy emergency crisis measures recedes after 3 years.  The Governing Council, which holds its first session this year on Jan 10, will seek to extend the calm it’s instilled on markets with last year’s pledge to do anything in its power to end the crisis.  While policy makers will probably keep interest rates unchanged for now, the threat of unlimited bond purchases has bought time to focus more on ending the region’s looming recession.  Euro policy makers face potential pitfalls arising from mounting debt in Spain, next month’s parliamentary election in Italy & continuing austerity in Greece.  The finance ministers are also assembling a rescue package for Cyprus, the crisis’s 5th bailout.


Stocks are treading water with a slight bias on the sell side.  Alcoa (AA), a Dow stock, is scheduled to report earnings tomorrow & analysts are looking for EPS of 6¢.  The budget related fights are just getting started, but it is expected that the politicos won't get serious until Feb.  Wait to the last minute is the way business gets done in DC & markets traders don't mind.  I think there will be a day of reckoning.