Dow dropped 44, decliners over advancers 2-1 & NAZ fell 11.  Financial Index slid 1 to the 234s.  The MLP index lost 2 to the 426s & the REIT index sold off 3 to the 278s.  Junk bond funds slipped lower  & Treasuries also saw selling.  Oil rose to the highest level in more than four months as the Federal Reserve maintained an asset-buying program to boost the economy.  Gold capped the biggest gain in almost 3 weeks after a report showed the US economy unexpectedly shrank in Q4, boosting demand for the metal as a haven. 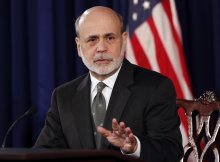 The Federal Reserve (FED) will maintain its asset buying of $85B a month & stick to its commitment to hold interest rates near zero until unemployment falls to at least 6.5% from the current 7.8%.  The FED decision, following a 2-day meeting, had been widely expected, especially after a surprising decline in GDP growth for Q4.  Markets showed relatively little reaction to the GDP report, in part because it reinforced expectations that the FED will continue to provide stimulus as long as the economy is weak.  The minutes of the last FED meeting in Dec showed that some members thought QE should end this year, a comment that helped send interest rates higher this month.  The FED said the slowdown in growth was largely because of weather-related disruptions & other temporary factors.  It noted that employment continues to expand at a moderate pace, consumer spending & business investment increased & the housing sector showed further improvement.  The central bank also said strains in global financial markets have eased somewhat, but cautioned that risks remain.


General Motors will add a wing to its engine & transmission development headquarters in Pontiac, Mich, with hopes of getting new technology into cars & trucks much faster.  It announced that it would spend $200M to add 138K square feet of new labs, allowing it to consolidate work from 4 other facilities.  The move won't create any new jobs, but it will bring 400 more positions to headquarters, raising its total employment to 3900 from 3500.  Work on the new wing is expected to start in the spring & be finished during H2 of 2014 as part of GM's plan to invest $1.5B in its North American facilities this year.  The company said that the new wing will help speed development of new engines & transmissions because the company is behind competitors on powertrain technology.  The company has 6-speed automatic transmissions while competitors have up to 10 speeds.  More speeds generally make cars & trucks more efficient & perform better.  The stock fell 51¢.

Economic confidence in the euro area rose more than forecast in Jan, adding to signs that the 17-nation currency bloc may be emerging from a recession.  An index of executive & consumer sentiment rose to 89.2 from a revised 87.8 in Dec, according to the European Commission, the highest since Jun.  The forecast called for an increase to 88.2.  ECB President Mario Draghi said last week economic activity is “stabilizing at a very low level” & Germany's Bundesbank expects Europe's largest economy to rebound in Q1 from a contraction at the end of 2012.  The euro-area economy shrank 0.1% in Q3 after a 0.2% contraction in Q2.  GDP probably fell another 0.4% in Q4 & will probably stagnate in Q1 2013.  Spain's recession deepened more than forecast in Q4 as the gov struggled to rein in the euro region’s 2nd-largest budget deficit weighed on domestic demand.  GDP fell 0.7% in Q4.  A gauge of sentiment among European manufacturers improved to minus 13.9 from minus 14.2 in Dec, today’s report showed.  An indicator of services confidence rose to minus 8.8 from minus 9.8, while consumer sentiment climbed to minus 23.9.


The shrinking economy had little impact on stocks.  While the news was unexpected, traders took it reasonably well.  Markets are very overbought & this decline has to be viewed as mild.  Dow still has a whopper size gain of 800 in Jan.  Markets may not do a lot tomorrow as they wait for the Jan jobs report on Fri.  Bulls remain in charge although there are a number of dark clouds overhead.