Markets give back early gains

Stocks started the day strongly higher with the Dow up 100, then sellers returned. Dow is down 8, advancers barely ahead of decliners (the ratio had been 3-1 in favor of advancers) & NAZ which should be strong is down 14. After starting higher, banks stock also sold off taking the Financial Index into the red. It's approaching the yearly lows of 182.


The Alerian MLP Index gained 2 to the 323s while the REIT index was up a fraction in the 199s. Junk bond funds were about 1% higher. The VIX was down a fraction to 25, little changed in recent weeks. The € was flat at $1.27. Treasury yields remain at uncomfortably low levels. Today the yield on the 10 year bond rose 2 basis points to 2.63%.

Commodities are taking a rest today & probably will remain little changed until after Labor Day. 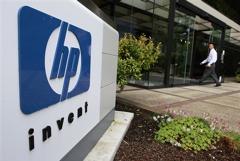 
Hewlett-Packard (HPQ), a Dow stock, bid $1.5B for data storage provider 3Par (PAR) after Dell (DELL) agreed to acquire the company for $1.13B last week. They both have been looking to expand beyond personal computers over the past few years in a search for bigger profits. PAR provides software for organizing data on corporate servers using an approach known as "cloud computing." HPQ will pay $24 per share, a 33% premium over the $18 DELL bid. HPQ is the world's biggest computer maker & Dell is #2. PAR stock had been lumbering along in the low teens since it went public almost 3 years ago, but today shot up 7+ to 25.33. HPQ is down 67¢ while DELL is down a penny.

American International Group (AIG), in its single biggest repayment of bailout loans so far, is paying back nearly $4B in gov aid with proceeds from a recent debt sale. Its aircraft leasing company, International Lease Finance, completed the sale of $4.4B in debt & AIG will use most of the proceeds to repay the Federal Reserve Bank of New York, trimming the balance on its credit line with the Fed to $15B. But adding interest, the total is about $21B. "This is continuing tangible evidence of AIG's progress in repaying the American taxpayers," said Robert Benmosche, AIG President & CEO. "AIG is getting stronger every day. We still have more work to do, but we will finish the job and make sure we repay the American taxpayers" he added. The repayment will release about $10B of collateral pledged to the Federal Reserve under the credit agreement. Separately, AIG said it will book a pretax charge of about $650M against its earnings due to the repayment. The stock is up 24¢ & has been steady near $35 after being a flier earlier in the year.

M&A activity should bring back buyers, but that effect only lasted a couple of hours today. A lot of housing number are coming this week & they are not expected to be pretty. Dow keeps plodding along with a downside bias, 10K is less than 200 away.

Get your favorite symbols' Trend Analysis TODAY!!
Click Here
Posted by Avi at 10:11 AM