Stocks managed modest gains despite uncertainty about taxes next year & looming credit problems in Europe.  Dow added 40, advancers 2-1 over decliners & NAZ was up 20.  Banks continue on their winning ways in Dec.  The Financial Index is up 17 this month.

Oil fell after China took steps to counter inflation, potentially slowing economic growth & fuel demand in the world’s biggest energy-consuming country. Gold fell, capping the biggest weekly loss in a month, as concern that China may tighten monetary policy eroded demand for precious metals. However both are near yearly & all time highs, respectively. 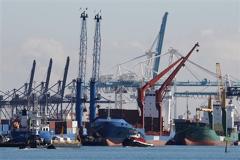 
The trade deficit fell to its lowest level in 9 months, as growing demand for American goods overseas & a falling dollar pushed exports to their highest level in more than 2 years.  The trade deficit narrowed to $38.7B in Oct, according to the Commerce Dept, 13% below the Sep deficit of $44.6B.  US exports rose 3.2% to $158.7B, the highest level since Aug 2008. Sales of American-made machinery, farm products & autos fueled the growth. Imports dipped 0.5% to $197.4B, with lower demand for oil & foreign-made cars.  The dollar's value against many major trading partners has been on a downward trend since Mar 2009, helping boost exports.  This should help boost overall economic growth in the US in Q4, a switch from previous qtrs, when the rising trade deficit had been a drag on growth.  The deficit with China dropped 8.3% to $25.5B in Oct (over $300B annualized). So far this year, the trade gap with China is running 20.3% above last year's level & is on track to match the all-time high set in 2008.  YTD the trade deficit is running at an annual rate of $505B, up 34.6% from 2009.


General Electric (GE), a Dow stock, increased the div for the 2nd time in 5 months.  The quarterly div was raised 2¢ to 14¢, after GE raised it from 10¢ in Jul.  CEO Jeffrey Immelt said, “We are able to increase the GE dividend for the second time this year because of continued strong cash generation, accelerated recovery at GE Capital and solid underlying performance in our industrial businesses,”  The boost marks a return to GE’s pattern of announcing annual increases in Q4 which the company did from 1983-2007. In Feb 2009, GE cut its quarterly dividend to 10¢ from 31¢ as the global financial crisis deepened. When the board boosted the dividend in Jul, the company also resumed share buybacks.The stock went up 59¢ to 17.72 after lumbering along in the mid teens for more than a year.

The strong showing for exports is a very positive story & should have brought out more buyers today.  That means US factories have more customers, only these are overseas.  If exports continue strong, that could add 1-2% to the GDP growth rates which is limping along at a modest 2% annual rate (barely enough to reduce the all important unemployment rate).  The GE div increase was a plus although not significant at the big picture level.  Expect uncertainty about next year's taxes to drag on thru the end of the year & maybe into next year.  The Irish bailout is also unclear, maybe we'll learn more next week.  Dow is up a smidgen this week & up almost 400 in Dec (largely due to gains in the first 2 days)..