Mixed markets after an increase in unemployment rate

Stocks did not sell off too badly after the uptick in the unemployment rate was announced.  Dow is down only 20, decliners barely ahead of advancers & NAZ was flat.  Bank stocks took the disappointing news fairly well.  The financial Index is still up about 8 in the last week.

The Alerian MLP Index was down a tad, in the 357s after being flattish for over 2 weeks.  The REIT index fell 1½ to the 218s, also pretty much trading sideways for that period.  Junk bond funds were mixed to lower, remaining near yearly highs.  There was buying in Treasuries, but not that much considering recent price declines.  The yield on the 10 year Treasury bond fell 4 basis points to 2.96%.  The € is also in a rally mode, up 1½¢ to $1.33½ & off recent lows of $1.30.

Oil retreated from a 25-month high after US employers added fewer jobs than forecast in Nov & the unemployment rate unexpectedly increased, signs fuel demand may be slow to rebound.  Buyers flocked to gold, much more than to Treasuries, taking gold in record high territory. 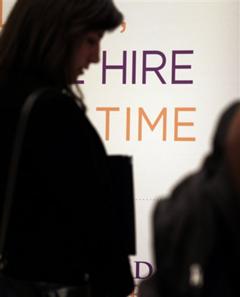 
The nation's unemployment rate climbed to 9.8% in Nov, a 7-month high, as hiring slowed.  Employers added only 39K jobs last month, a sharp decline from the 172K created in Oct according to the Labor Dept. Weakness was widespread as retailers, factories, construction companies, financial firms & the gov all cut jobs last month.  Predictions had been for an addition of 150K jobs, based on positive reports that showed busier factories, rising auto sales & a good start to the holiday shopping season in Nov.  Part of the reason for lower numbers was the gov has a difficult time adjusting for seasonal factors, & the past 2 Novs were extremely volatile.  Still, the report was a reminder that the economic recovery is proceeding more slowly & fitfully than many had expected. This is likely to create a push for an extension of long-term unemployment benefits, which expired this week. Private companies created only 50K jobs, down significantly from the 160K jobs created in Oct & the smallest gain since Jan.  The jobless rate has now topped 9% for 19 straight months, the longest stretch on record.  All told there were 15.1M people unemployed in Nov.  Adding those unemployed people to others who are working part time but would prefer full-time jobs & those who have given up looking for work, 17% of the labor force is "underemployed," same as Oct which is close to a record high set last year.  Another grim figure: There was a record 1.3M "discouraged" workers in Nov (those not currently looking for work because they believe no jobs are available to them).  The graphs below tell it all.

The market for junk bonds is reviving, after companies pulled sales last week.  Investors are gaining confidence that Europe’s sovereign debt crisis won’t infect the global economy.  Junk bond issuance, which declined in Nov following the busiest 2-month period on record, is returning amid reports retail sales rose the most since March. The European Central Bank extended an emergency loan program and it pledged to fight “acute” financial market tensions.  The average yield on junk debt of 8.04% compares with the 4.01% on investment-grade bonds & 2.9% on Treasury 10 year bonds. The asset class has returned 13.6% this year, beating the 9.5% on higher-rated corporate & 6.9% on US gov debt. With only limited attractive alternatives, relatively low yields on junk bonds still look good.  The chart below shows the dramatic rise for junk bond funds off their lows, but it understates returns on many individual funds which typically have more than doubled off their lows.  The absolute yield for junk bonds is near record lows & the spread over the 10 year Treasury is also near historical lows.  However, conditions for low relative yields have lasted for a few years as was the case in the middle of this decade.

Bulls are happy, the markets took the disappointing news on unemployment so well.  Strength in the junk bond markets reinforces the notion that investors still embrace risk as they pursue higher yields.  MLPs & REITs have been trading sideways recently, they may also be influenced by the rise in competitive yields on Treasuries.