Dow wasn't sure where to go, but is up 29 presently, advancers ahead of decliners 3-2 & NAZ added 17.  Bank stocks reversed early losses & are back in the black

Oil wants to break thru 90 with all the bullish sentiment, but not today.  Gold fell to a 2-week low on investor sales following a 26% rally this year.

First-time claims for unemployment benefits unexpectedly declined last week, suggesting the labor market is on the mend. Applications for jobless claims decreased 3K to 420K, the lowest in 3 weeks, according to the Labor Dept. Expectations had for for an increased to 425K. There were no special factors in last week’s decrease.  The 4-week moving average decreased to 423K, the lowest since early Aug.  The number continuing to collect benefits rose 22K to 4.14M.  The continuing claims figure does not include the number of workers receiving extended benefits under federal programs. Those who’ve used up their traditional benefits & are now collecting emergency & extended payments increased by 324K to 4.83M as the House will shortly vote on extending those benefits.  The numbers are a little better, but not enough to reduce the unemployment rate.

Home construction nudged up in Nov after 2 months of declines as builders broke ground on 555K units (annualized), a 3.9% rise from Oct, according to, the Commerce Dept.  However, housing starts are just 16% above the 477K unit pace in Apr 2009, the lowest point on records dating back to 1959!  In addition, they are down 76% from their peak 4 years ago & 45% below the 1M annual rate consistent with a healthy market.  The activity last month came from building single-family homes. They increased to a pace of 465K units, a 6.9K rise from Oct. Apartment construction fell 9.1% to a unit pace of only 90K.  Housing permits, a barometer of future demand, fell 4% to an annualized rate of 530K, reflecting weakness in apartment construction. It marked the lowest level in permits since Apr 2009. More than a year after the recession ended, the housing market is struggling. 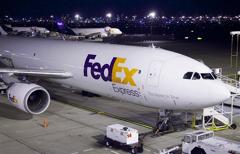 FedEx (FDX) reported fiscal Q2 earnings tumbled on higher costs & one-time charges, but raised its earnings prediction for the full-year on a better economic forecast & a brightened view for the holidays.  FDX said while shipments improved in all of its units, growth moderated in its intl priority unit, which had been booming (it includes exports of high-value items like computer parts & iPods.  FDX now expects EPS of $5.00-5.30 a share for the fiscal year ending in May, above previous guidance of $4.80-5.25. But the new prediction is still mostly under expectations of $5.21.  EPS was 89¢ in the Sep-Nov period, down from $1.10 last year.  EPS was $1.16 per share excluding one-time costs such as the integration of its trucking operations & higher maintenance expenses.  Revenue rose 12% to $9.6B.  Analysts expected $1.31 per share on revenue of $9.7B.  For its Q3, which includes the key holiday shipping season, it expects EPS of 95¢-$1.15 versus $1.10 per share by analysts & up from 76¢ last year.  The stock rose 1.59.

Markets did not respond well to encouraging news on jobless claims & the outlook by FDX.  There are 2 whopper tax bills in DC, one to extend the lower tax rates & the other to fund the gov for the next year (already a few months late).  Both are loaded with plenty of pork, little was learned from the conservative bias in the recent elections.  Uncertainties about the Irish bailout are not helping bring out buyers.  The sell-off for MLPs is noticeable.  They could be weak for awhile as investors need time to adjust to the higher rates on Treasuries.