Tensions in the Koreas & Europe were too much for the markets to overcome.  Dow sank 95, decliners over advancers better than 2-1 but NAZ dropped a more mild 8.  Bank stocks led the way down bringing the Financial Index to one of its lower levels in 3 months.


The Alerian MLP Index fell 1 to just under 358 & the Dow Jones REIT Index was down almost 1 to the 216s.  Junk bond funds were mixed, remaining near their best level of the year. Treasuries hardly moved as the yield on the 10 year Treasury bond was down almost 1 basis point to 2.87%.

Oil was flat & gold sold off despite growing intl concerns, 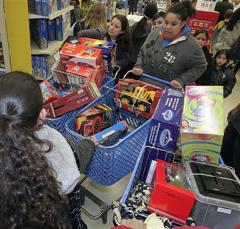 Bargain shoppers, braving rain or frigid weather, crowded the nation's stores in the wee hours of the night to get their hands on deals from TVs to toys on Black Friday.  Early signs pointed to bigger crowds at many stores for the traditional start to the holiday shopping season.  In an encouraging sign for retailers & for the economy, more shoppers appeared to be buying for themselves than last year, when such indulgences were limited. Lengthened hours that pushed some store openings into Thanksgiving also appeared to pay off.  Analysts monitoring stores said many people were paying with cash & were focused, doing plenty of research before venturing out.  Retail analysts, estimated that 15% of purchases on Fri were items for the shoppers themselves, up from about 9% last year. On Black Friday 2008, that figure was estimated to be a meager 5% (in good economic times, such purchases run about 26%).  Estimates for holiday sales vary from little changed to increases of as much as 4½%. The retail federation predicts a gain of 2.3% to $447B after an uptick of only 0.4% last year & a 3.9% drop in 2008.

Dow has returned to where it was on Oct 13 on the way up.  Another way to look at this is that Dow has gone nowhere in almost 6 weeks.  Intl financial challenges remain large.  Irish officials raced to complete a deal for an intl aid package before financial markets reopen next week with talks centering on the status of bondholders in Ireland’s largest banks.  North Korea is an unknown with the potential for causing problems to intl trade.  Retail sales data looks to be promising, although gains will be limited when compared with the best years.  Nov auto sales will be out next week & the monthly jobs report comes on Fri.  Today's volume on the floor of NYSE was a measly 0.4B, partially due to just ½ day of trading.  Best wishes for a  joyous holiday season!!