Stocks were weak all day, but buying in the PM reduced losses.  Dow fell 62, decliners over advancers 5-2 & NAZ dropped 12.  Bank stocks led the selling & the Financial Index ended with a significant loss.

MLPs & REITs retreated as expected, but nothing out of the ordinary.  Each index dropped fractionally, remaining near recent highs.  Junk bond funds edged higher & Treasuries were strong on the weak jobs report. That report took oil lower while gold shot up $10 to $1545 ($32 below its record highs).

Consumers in the US borrowed more in May for the 8th straight month & used credit cards more for only the 2nd time in nearly 3 years.  The Federal Reserve said consumer borrowing rose $5.1B following a revised gain of $5.7B in Apr.  Borrowing in the category that covers credit cards increased, as did borrowing in the category for auto & student loans.  The increase in credit card borrowing marked only the 2nd monthly gain since Aug 2008.  Since the financial crisis, consumers have been cutting back on the use of credit cards, which has depressed economic growth by holding back spending.  The economy continues to sputter.

Consumers borrowed more for 8th month in May AP


Below is a a brief schedule of earnings releases next week: 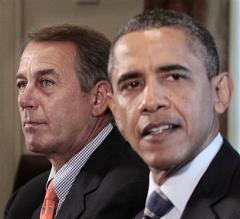 After a weak jobs report, the president called for swift action to raise the nation's borrowing limit because uncertainty over the debt ceiling has hindered hiring in the private sector.  He linked 2 high profile issues, the weak economy & a massive budget deal to meet an Aug 2 deadline to increase the debt limit.  "The sooner we get this done, the sooner that the markets know that the debt limit ceiling will have been raised and that we have a serious plan to deal with our debt and deficit, the sooner that we give our businesses the certainty that will need in order to make additional investments to grow and hire," Obama said.  "The economic challenges we face weren't created overnight and they're not going to be solved overnight," he continued.  Obama met yesterday with the top leaders of Congress & has called them back for a rare weekend meeting on Sun.  Obama is pushing for an ambitious deficit reduction plan of $4T, the biggest of 3 options he laid on the table.  It would require sizeable tax revenue increases, which many Reps oppose, & spending reductions for entitlement programs, opposed by many Dems. They hope to work out the details at future meetings.


The price for gas at the pump has pulled back but remains at levels which are squeezing consumer budgets.  The price is up about 80¢ from last Jul.

The jobs report was a major shock to the stock markets.  But there are still plenty of optimists with the Dow only 150 below its 2011 high.  The dreary numbers are even being felt in negotiations to raise the the debt ceiling.  I think earnings will be good, but fall short of great.  Earnings next week will have unusual importance in giving guidance for the rest of the earnings reports.  Big bank earnings are especially difficult to predict because they have so many crosswinds.  But they also have the potential for the biggest disappointments.  All is not well in financial markets when gold is near record levels.