Dow gained 56, but advancers were slightly ahead of decliners & NAZ was up 8.  Bank stocks were lower on added worries over European debts.

The MLP  index was up fractionally & the REIT index rose 1¾ to 249 (just 1 below the 2011 highs reached in late Apr).  Junk bond funds inched up while Treasuries eased back after strong gains yesterday.  Oil prices are resting following recent gains but gold shot up again, shown in its 3 day chart below.  The finances of the weaker countries in Europe & recent moves by China are lifting demand for an alternative investment like gold.

President Obama said the debt ceiling should not "be used as a gun against the heads" of Americans to retain breaks for corp jet owners or oil & gas companies.  Obama is seeking to reduce the deficit, in part, through new tax revenue raised by closing loopholes & tax subsidies.  Among the loopholes cited are tax benefits for corporate jets.  He also called for ending subsidies to oil & gas companies, a proposal that would generate about $40B in revenue over 10 years.  Reps have opposed measures that raise taxes.  The administration & congressional leaders are working to complete a deal on a long-term budget reduction package by Jul 22. That would give Congress enough time to craft legislation raising the $14.3T debt limit before Aug 2, when the Treasury said that its borrowing authority expires.  This is clearly a "work in progress" with a lot riding on it for the stock markets. 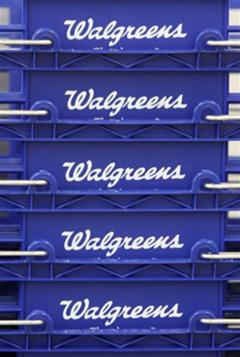 Walgreen, a Dividend Aristocrat, Jun sales rose 6.8%, as more shoppers came to its stores & spent more money per trip.  Revenue grew to $6.04B from $5.65B. Revenue from the pharmacy parts of its stores improved 6.2% & sales of items like cosmetics, food & drinks (sold at the front end of stores) rose 6.4%.  Monthly customer traffic rose 1.3% compared to Jun 2010 & customers spent 3.4% more per trip.  Revenue at stores open at least a year rose 4.8%. Pharmacy revenue at those stores grew 4.9%, prescriptions increased 5% & front-end revenue improved by 4.7%.  These figures beat expectations of a 2.9% increase. The company operates 7733 drugstores.  Separately, WAG announced a partnership between its Take Care Health Systems business & Core Performance, a company that offers wellness, fitness & nutrition programs.  The stock liked the news, gaining 65¢.

There is a report that Apple has ordered 25M units of its next generation iPhone, possibly the iPhone 5, by the end of the year.  The stock has had a nice pop in the last few weeks & rose 2.33 today.  All I know is what I see.  There is a ton of new competition for the iPad, generally run on Android from Google (GOOG), & Android phones have twice the market share of Apple's iPhone system.  The markets may be soaring, but Apple's share has to be shrinking.

The talks about increasing the debt ceiling are getting serous with the clock ticking.  Tax changes for energy companies have the potential to bleed thru to MLPs, although there has been no hint of that yet.  So far the index has not been disturbed by discussions involving tax increases on energy companies.  MLP owners should keep their eyes are the goings on in DC.  Dow is less than 200 away from setting a new 2011 high, although the markets in general; have been sluggish yesterday & today.  The Jun jobs report on Fri is a worry for everybody.

Find out what's inside Trend TV
Click Here
Posted by Avi at 4:41 PM