Stocks are having a bad day.  Dow dropped 145, decliners over advancers better than 6-1 & NAZ fell 52.  Banks are leading the way down on worries about their exposure to European bank debts.  A 5 point decline for the Financial Index represents a very bad day & we're almost there.

MLPs & REITs took a beating in the selling.  Each index dropped about 4½.  The chart below for the index for that replicates AMZ, shows it's back to where it was in late Jun.  Junk bond funds were mixed to lower but Treasuries charged ahead.  The yield on the 10 year Treasury is back below 3% & may be going much lower even though formal buying by the Federal Reserve is finished.  Oil declined for a 2nd day on speculation that a slump in Chinese imports & rising unemployment in the US may indicate fuel demand will falter in the biggest crude-consuming nations. After going above $1550, gold has settled back to $1545.

European finance ministers clashed over how to take Greece out of its financial hole as bonds of Spain & Italy are opening a new front in the debt crisis. They want to get private bondholders to maintain their exposure to Greek debt in a way that doesn’t prompt credit-rating companies to declare a formal default.  That's not easy! Forcing bondholders to chip in would be “fatal,” Austrian Finance Minister Maria Fekter said. “We will now in the eurogroup discuss the proposals on the table and their impact with respect to a Greek insolvency or classification as an insolvency.”  Debt-strapped countries bonds plunged, the € sank & stocks dropped amid concern that European govs are powerless to prevent the financial distress spreading from Greece.  Italy's effort to build a firewall against the spreading crisis formed the backdrop to current meeting of finance ministers. Italy, struggling with Europe's 2nd-highest debt load, curbed short selling as its 10-year bond spread over Germany rose to 284 basis points, a €-era high & more than double its 2011 low of 122 basis points.  Greece’s next package hinges on the EU finding a formula for getting investors to roll over Greek debt holdings so that govs don’t suffer losses when bonds come due between 2012-2014.  An accord on Greece is unlikely before Sep which will trigger the flight of capital out of non-core sovereign bonds & their banks.  The Greek drama is not over, just playing on.

Dunkin' Brands Group, the parent of Dunkin' Donuts, plans to raise as much as $401M thru an IPO of 22.3M shares priced between $16-$18.  The company anticipates proceeds of about $348M after expenses if the IPO is priced at $17.  The underwriters were given an option to buy up to an additional 3.3M shares.  The stock will trade on the NAZ under the symbol  "DNKN." 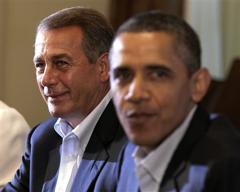 Congressional leaders returned to the White House for another round of budget bargaining with President Obama, who has that he will call daily meetings until they break their partisan stalemate.  Today's meeting is focusing on formalizing tentative agreements lawmakers reached in talks led by VP Joe Biden. Reps say the Biden group identified more than $2T in cuts, but Dems put the true figure significantly lower.  The 2 sides appear to be no closer to a deal than when the Biden talks hit an impasse last week on the tax issue.  At yesterday's meeting, Obama continued to push for a "grand bargain" in the range of $4T worth of deficit cuts over the coming decade, but momentum is clearly on the side of a smaller measure of perhaps half that size. Obama continues to press for revenue increases but Reps are stoutly opposed.  Yesterday's sometimes testy session was shorter than some had anticipated & it's clear neither side is willing to budge on taxes. Dems say tax increases are a prerequisite for big spending cuts; Reps rule out the idea unless taxes are lowered elsewhere.  Expect negotiations to drag on until the last minute, potentially on Aug 1.

As earnings season is about to begin, worldwide financial problems are taking center stage.  Europe is going from bad to wrose.  The threat of Italy, a major country, having financial problems is too much for markets to ignore.  China is slowing its economy with inflation is on the rise. Resolving the issues so that the debt ceiling can be raised looks to be far down the road, although last minute juggling with Scotch Tape is how enormous problems are solved.  Alcoa (AA), a Dow stock, reports earnings after the close to give a first glimpse of what to expect from the earnings reports.  I expect earnings to be mediocre at best (especially at the big banks) but worldwide financial problems will be the major driver for markets in Jul..

Get your favorite symbols' Trend Analysis TODAY!
Click Here
Posted by Avi at 11:42 AM