US and European debt worries weigh on markets

Dow sank 153, decliners over advancers almost 6-1 & NAZ dropped 37.  Bank stocks are leading the way down with the Financial Index at a new 7 month low!

The MLP index fell 2 to the 371s & has done little in Jul while the REIT index dropped 3½ to the 242s.  Junk bond funds were marginally lower & Treasuries rose taking their yields to the lows of the year.  Oil fell as investors bet that the worsening debt crisis in Europe may slow the economy & crimp fuel demand.  What's there to say about gold?  Nervous investors are buying gold, pushing its price to almost $1600.  While the stock markets have stumbled, gold has had a great year (see chart below). 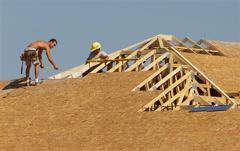 The outlook among US. homebuilders became a bit rosier in Jun but the future prospects for home construction are anything but promising.  The National Association of Home Builders index of builders' outlook for the industry rose 2 points in Jun, to 15. Any reading below 50 indicates negative sentiment about the housing market & the index last reached 50 over 5 years ago at the peak of the housing boom.  Last year, the number of people who bought new homes hit its lowest level on records dating back nearly a half-century & this year could be just as bad.  Each new home built creates an average of 3 jobs in a year & generates about $90K in taxes.

Gannett, publisher of USA Today & 80 other daily newspapers, reported Q2 net income declined 23%, dragged down by lower ad revenue in its publishing segment.  But it said results are showing improvement, & to show confidence in its business prospects, GCI is resuming share buybacks & doubled the quarterly div to 8¢.  Q2 EPS of 62¢ was down from 81¢ last year.  Excluding one-time items, EPS was 58¢, ahead of 57¢ forecasted.  Revenue slipped 2% to $1.33B.  Company-wide digital revenue rose nearly 13% from last year, to 276M.  But, advertising revenue in the publishing division fell 7% to $647M. Print advertising revenue has been shrinking at most major newspaper publishers as advertisers turn to free or cheaper alternatives online.  Broadcasting segment revenue was up slightly to $184.4M. Last year's results were boosted by $11.7M in political advertising that didn't happen this year.  The stock fell 28¢ after going nowhere in the last year.

There's not a lot to say when the financial world is dominated by chaos.  Raising the debt ceiling is still stuck & mud which can be expected to drag on into Aug!  European sovereign debts are a mess.  Earnings season should be the focus of the markets, but times are grim  Apple (AAPL) earnings will be reported tomorrow & its fans are hoping it will get another grade of A+.  The stock had been lumbering along all year, but in the last month it shot up to another record high to the 368s. Tomorrow's report will tell us if the markets are listening.

Get your favorite symbols' Trend Analysis TODAY!
Click Here
Posted by Avi at 11:34 AM