Dow sank 151 (finishing near the lows), decliners over advancers 5-1 & NAZ dropped 57.  Bank stocks led the way down, with the Financial Index suffering a substantial loss & may want to test recent lows of 197.  Exposure to deposits at European banks weighed on the big banks.

The indices for MLPs & REIT had similar falls, down 3-4 after getting close to their yearly highs.  Junk bond funds were generally lower while Treasuries soared.  The yield on the 10 year Treasury is approaching 2.9%, down from 3.2% just 5 days ago.  Risk averse is back in vogue.  Oil fell in sympathy with selling in stocks but gold climbed to a 2-week high, topping $1,550 an ounce, on demand for a store of value amid escalating concerns that Europe's sovereign-debt woes will widen.

The Federal Reserve (FED) may keep interest rates at record lows for the longest period since WWII with the economic slowdown. The 3% gap between yields for 3-month & 10-year Treasuries indicates the economy may grow 1.1% in the 12 year ending Jun 2012, according to a study by the Fed Bank of Cleveland. That’s less than half the central bank’s current forecast & may delay any rate increase from the 0-25% range held since Dec 2008.  Slower expansion means the FED is unlikely to tighten credit until Jun 2012, the longest static period since the gov forced the central bank to buy Treasuries during the 1940s.  Growth expectations in the US & overseas are probably modest & substantially below the forecasts made at the end of last year.  Confidence in the economy has waned since Feb, when 10-year Treasury yields reached a yearly high of 3.77%, & federal fund futures showed a 51% chance of a central bank rate increase by Dec. That percentage dipped to 39% in Apr & stands at 10% now. 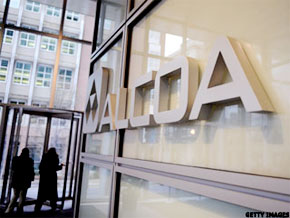 Alcoa (AA), a Dow stock, will begin earnings season after the close & there's a good chance it will deliver a 5th straight above-consensus report.  The 3rd-largest producer of aluminum is considered a barometer for health of the industry & a good gauge on the health of the manufacturing sector.  AA shares tend to take their cue from aluminum's price in London. For Q2, the London quote fell 3%, or about $80 per ton, to roughly $2,510. Aluminum hit a high of $2,770 in late Apr, but dropped sharply into May. The pullback in AA stock was deeper as the shares slumped 9.2% but the stock has bounced a bit in Jul.  YTD, the shares gained 7% & over the past 52 weeks is up nearly 54%.  The average estimate is calling for EPS of 33¢ in Q2 on revenue of $6.3B, a performance that would reflect strong year-over-year gains for the company from last year's 13¢ on revenue of $5.19B.  If the forecasts are correct, the company would deliver its first $6B revenue qtr since Sep 2008 (when the stock market plunged).  However its report turns out, goings on in financial markets around the world will take precedence.

Stock markets were supposed to be having another great year, so much for forecasts.  Stocks had a significant rally last year after Greece received a bailout.  But all is not well & more bailouts for more countries is not only getting embarrassing, but there is not enough money to fund it all.  Speaking of bailouts, the US is still fumbling around trying to deal with whopper sized budget deficits so Treasury securities don't go into default.  All this uncertainty spells a flight to safety again & this time it could lead to a large sell off of stocks (with gold near its recent record levels).  Besides AA this evening, General Electric (GE), JPMorgan (JPM) and Citi (C) are due later this week.  There are concerns about what to expect, partially because they will be compared with last year which was a year of recovery.  This may not be pretty earnings season.  Also, budget talks in DC could affect MLPs when they start throwing around the concept that energy companies need to pay more taxes.