Dow dropped 38, decliners over advancers better than 3-2 but NAZ gained 1 as the CES show opens in Las Vegas.  Financials were also a little lower.

The MLP index fell a fraction to the 363s & the REIT index was off 1+ to the 223s.  Junk bond funds were trying to inch their way higher.  Buyers flocked to Treasuries on the less than exciting economic news.  The yield on the 10 year Treasury bond fell 7 basis points to 3.42%.

Oil fell below $90 a barrel as the dollar strengthened against the € on concern of a slower recovery in some European nations will prolong the region’s debt crisis. Gold fell for the 3rd straight day on mounting speculation that an improving economy will cut demand for the metal.

Retailers are reporting surprisingly weak Dec revenue after a strong Nov pulled forward holiday spending & a blizzard in the Northeast took a bite out of sales after Christmas.  The results raise worries that the holiday season might be less stellar than some had hoped, but some still expect spending in Nov & Dec to show the largest increase since 2006.  As merchants report their figures, many retailers including Target (TGT & a Dividend Aristocrat)., Costco (COST) & Macy's (M) reported gains below expectations. Bon-Ton (BONT) sales were virtually flat, company officials blamed the severe snowstorms.  The figures are based on revenue at stores opened at least a year, considered to be a key indicator of a retailer's health.

The disappointing Dec figures were surprising given earlier data from MasterCard Advisors' SpendingPulse & anecdotal evidence that pointed to a strong Dec.  COST sales at warehouse clubs open at least a year climbed 6% in Dec, a bit below the 6.2% rise predicted.  TGT revenue at stores open at least a year rose 0.9%, well below the 4% increase predicted as strength in groceries & clothing was offset by weakness in electronics, toys & some home categories.  Sales for key gift categories were pulled forward into Nov, Target  CEO Greg Steinhafel said & merchandise with lower profit margins made up a higher portion of sales than expected.  Macy's revenue at stores opened at least a year rose 3.9%, below the 4.5% estimate, but combined Nov & Dec sales rose 4.6% & the company is sticking to its profit outlook for Q4.  BONT said revenue at stores opened at least a year rose 0.1% because the Northeast blizzard shaved off 1½-2 percentage points.  Now the stores are going into seasonally slow Jan. 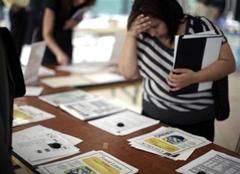 Photo:  Reuters
New claims for jobless benefits moved higher last week, but a decline in the 4-week average to a nearly 2½ year low indicated a trend toward better labor market conditions remained intact.  Initial claims unemployment benefits increased 18K to 409K (above expectations for 400K), according to the Labor Dept. The prior week's figure was revised up to 391K from the previously reported 388K.  The 4-week moving average of unemployment claims fell 3K to 410K, the lowest level since late Jul 2008. It is believed this gauge needs to fall below 400K to signal strong jobs growth needed to reduce the lofty unemployment rate.  The report also showed the number still receiving benefits under regular state programs after an initial week of aid fell 47K to 4.1M, in line with expectations. The number on emergency unemployment benefits fell 133K to 3.6M & 8.8M were claiming unemployment benefits during that period under all programs.  Numbers during the holidays are always suspect but the trends from previous months are continuing

Boeing (BA), a Dow stock, sold more than 3 times as many commercial airplanes in 2010 as in 2009 & beat its delivery target as air-travel demand recovered from the global economic crisis. BA had 530 net orders last year (stripping out cancellations), sharply above last year's 142 orders.  462 aircraft were delivered, surpassing its target of 460, after handing over 481 in 2009 when it was catching up from a strike in the year before.  BA & larger rival Airbus are boosting production this year to accommodate a surge in orders from airlines refreshing their fleets with more fuel-efficient jets.  Boeing climbed 83¢ after doing little in the last year.

Markets keep wavering, not sure where to go after the surge in the opening minutes of trading this week.  The jobless data is getting more analysts to raise estimates of jobs created in Dec (reported tomorrow) to over 150K with optimistic ones calling for more than 200K.  But the unemployment rate is expected to slip only 0.1% to 9.7%.  Bulls have to be discouraged with the markets faltering this week but they would respond by saying the markets are entitled & need a rest after their performance in recent weeks.