Dow dropped 115 taking it back below 12K, decliners over advancers about 2-1 & NAZ fell 33 following disappointing earnings from Oracle (ORCL) & Micron (MU).  Bank stocks fell, bringing the Financial Index near lows for the year.  They have plenty of problems, from worries over Greek debt holdings to more regulations which could force them to raise capital (by selling additional shares).

The MLP Index was up & the REIT index fell a smidgen, not so bad all considered.  Junk bond funds slipped a penny or 2 while Treasuries rallied, pushing yields to this year’s low, on concern Europe’s sovereign-debt crisis is getting worse.  Oil inched higher after reaching a 4-month low following the thought of 60M barrels coming to market.  Gold's soggy performance in the last 3 days is shown in its chart. 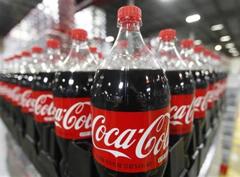 Coca Cola, with one of the best known brands in the world, will raise prices 3- 4% next month after  a 2% increase taken earlier this year.  The increases were due to higher-than-anticipated commodity costs.  Pepsi notified retailers of price increases of 3-5% in Q3.  Both companies are Dividend Aristocrats.  While I will feel the KO price increase directly, the bigger implications are serious.  Price increases for their food costs (like corn syrup) & packaging materials are being replicated at other companies selling consumer products, not a good sign for inflation going forward.  KO was down a small fraction & PEP rose.

The EU leaders vowed to stave off a Greek default as long as Greece pushes thru a package of budget cuts next week, pledging to do whatever it takes to stabilize the euro economy.  “We have agreed that there will be a new program for Greece,”  said Angela Merkel, German Chancellor. “This is an important decision that says once again we will fo everything to stabilize the euro overall.”  The next hurdle is get the Greek parliament to approve €78B ($111B) of austerity measures.  Greece’s Papandreou called the commitment to a new 3-year aid program “not only a green light but also a positive sign for the future of Greece.”  The drama plays on & is far from a done deal, especially with hostility coming from so many workers in Greece.


There is nothing  new going on with Apple, but it is a bellwether company with the 2nd largest market cap in the world & its chart for 2011 looks dreary.  When AAPL stock is stuttering, it sends one more signal stock markets will have problems moving ahead.  The stock fell 5 to under 326.

Brown Forman, known for Johnny Walker, Southern Comfort, etc., is at record highs.  The stock has more than doubled in the last 10 many years (many of the most famous companies envy that record) & is doing well from expanding its products around the world.  Strength in the last 2 months when markets have been selling off should continue, especially if global financial troubles increase.  The stock fell chump change in the 73s today.

This wraps up another dismal week.  Dow started just over 12K (after finishing its first up week in 2 months) but was not able to hold onto upward momentum.  The Greek debt situation drones on.  Behind it is Ireland, Portugal & maybe Spain & Italy.  The US has its share of financial problems as raising the debt ceiling has hit a major roadblock.  Meanwhile the US economic recovery is sputtering, no matter how it is measured.  Jul could be another tough month for the markets.