Stocks had a major rally on hopes of a favorable vote by the Greek parliament later this evening.  Dow shot up 109, advancers ahead of decliners 5-1 & NAZ jumped 57  Bank stocks were leaders although the Financial Index needs a lot more up days to get back to its late Apr highs.

MLPs had a quite a relief rally (a move greater than 5 is a big for the index) & the 350 floor was able to hold.  The Dow Jones REIT Index rose 2 to 241 & junk bond funds were higher.  Treasuries were a little weaker but the yield on the 10 year Treasury held below 3%.  Oil rebounded from recent selling although it's still below $96 that was considered so important last week.  Gold continues to look good. 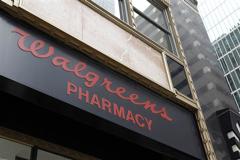 Walgreen, a Dividend Aristocrat, will walk away from more than $5B in annual revenue (about 7% of revenue) because pharmacy benefits manager Express Scripts doesn't pay it enough to fill prescriptions.  The impasse with ESRX overshadowed news that WAG net income climbed 30% in its Q3.  WAG will stop participating in Express Scripts' prescription plans starting Jan 1.  ESRX is the 2nd-largest pharmacy benefits manager in the US & expects to handle at least 750M prescription claims in 2011 with 90M filled at WAG stores.  WAG fell 1.90 on an up day in the markets & ESRX rose 20¢.

Walgreen says it will split with Express Scripts AP

JPMorgan Chase, a Dow stock, agreed to pay $153M to settle civil fraud charges that it misled buyers of complex mortgage investments as the housing market was collapsing & comes a year after Goldman Sachs (GS) paid $550M to settle similar charges.  As part of the settlement, investors will receive all of their money back. JPMorgan also agreed to improve the way it reviews & approves mortgage securities transactions.  The settlement amounts to less than 1% of the bank's 2010 net income.  The bank agreed to settle 2 weeks after CEO Jamie Dimon complained to Federal Reserve Chairman Ben Bernanke that new financial regulations designed to prevent another financial crisis were too burdensome on banks. The stock gained 43¢.

The price for gas at the pump is down to $3.63, giving some relief to drivers.  But it remains higher YTD & up sharply from last year.

Buyers were sensing a favorable vote by the Greek parliament on meeting demands for additional loans.  However it's still not a done deal & the situation remains volatile.  If Greece agrees to restrictions, more work will be needed next month.   In addition, other countries like Ireland, Portugal, Italy, etc. are waiting in the wings for bailout money.  Investors in the US are happy for the time being after Dow narrowed its decline to 600 from its highs 2 months ago.  The MLP index had an impressive gain.

Find out what's inside Trend TV Click Here
Posted by Avi at 4:40 PM