Stocks fluctuate while waiting for the announcement by the the Federal Reserve (FED) in a couple of hours.  Dow is up 4, advancers ahead of decliners 3-2  & NAZ hardly changed.  Bank stock had modest gains while investors are keeping their fingers crossed awaiting word from the FED.

The MLP index rose 1+ to the 363s & the REIT index added a fraction to 242 (looking strong after weakness earlier in Jun).  Junk bond funds edged higher as did Treasuries.  Oil futures extended gains after a US gov report showed a decline in inventories.  Gold rose to a 7-week high (within $25 of its recent record) as fluctuations in currency markets markets boosted demand for the precious metal as an alternative investment.

Get a unique daily insight into current markets & seminars below: 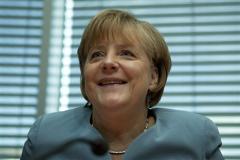 A full-scale restructuring of Greek debt would have "completely uncontrollable" effects on financial markets & could threaten other countries' stability, German Chancellor Angela Merkel warned.  These comments confirm her softened stance on the role of the private sector in a new Greek rescue package.  Imposing a so-called haircut on Greek debt, reducing the amount to be repaid, would endanger not only banks & other creditors who hold Greek bonds, but also institutions that sold insurance policies against a default, Merkel said.  Those credit default swaps have a "significantly higher" face value than the debt itself, & the consequences of them being called on can't be foreseen, she said.  "Nobody around the globe knows exactly who holds those papers and what it means if they come due," Merkel told the German parliament's European affairs committee.  She added it was also unclear "who will have to pay how much and who will need fresh capital in what way."  The chancellor wants to get private creditors to contribute to the next aid package on a purely voluntary basis, an initiative for which Merkel doesn't yet have a majority among the 27 European Union nations holding a summit in Brussels later this week.  The Greek drama plays on.

FedEx said the global economy will continue to see moderate growth as fuel & other costs subside.  The 2nd-largest package delivery company posted a 33% increase in earnings for its fiscal Q4. FDX benefited from stronger demand & levied higher fuel surcharges on its customers.  "FedEx is well positioned to deliver strong earnings growth in fiscal 2012," said Chairman Frederick W. Smith, citing momentum from Q4, moderate economic growth & "subsiding cost headwinds."  In Q4, EPS was $1.75 (beating expectations of $1.73) up from $1.33 last year. Revenue increased 12% to $10.55B.  Higher fuel surcharges helped increase revenue & offset higher diesel & jet fuel costs in Q4.  For the full year, EPS was $4.57 compared with $3.76 in fiscal 2010. Annual revenue grew 13% to $39.3B.  The company expects EPS of $1.40-$1.60 in its Q1 & between $6.35-$6.85 in its 2012 fiscal year (a little more aggrressive than forecasts of $1.42 in Q1 & annual EPS of $6.42).  FedEx will invest $4.2B into its operations in 2012 on new aircraft as well as investments in company facilities, vehicles & technological support services.  The stock rose 1.91 after trading sideways in 2011.

After the vote in Greece last night, US futures were flattish as a favorable vote was already baked in.  But now the big votes will come to decide if Greece will go along with austerity measures demand by stronger European countries.  The future of Greece remains fuzzy.  While the Greek drama plays on, gold keeps rising (moderately), but may be headed for new record highs.  MLPs are having a good week, remaining in the lower reaches of the 2 month trading zone.  The announcement by the FED will get extra attention, there should be mention about the end of QE2 & a reassessment of the economic recovery.

Get your favorite symbols' Trend Analysis TODAY!
Click Here
Posted by Avi at 11:31 AM