Stocks started weak & kept sinking, finishing close to their lows.  Dow fell 178, decliners ahead of advancers almost 5-1 & NAZ dropped 47.  Bank stocks led the way down, although almost all groups participated in the decline.  The Financial Index hasn't been this low in over 6 months.

The MLP index had a bad day, down 4 YTD, but finished 3 above its low.  The REIT index fell 4+ to the 232s, not seen since early Apr.  Junk bond funds were weak, many down 1+%.  Treasuries gained, pushing 2-year note yields down the most since Apr, after European Union talks on achieving a 2nd bailout for Greece stalled.  The yield on the 10 year Treasury is back below 3%.  Oil tumbled below $95 a barrel for the first time since Feb on concern that Europe’s debt crisis will deepen & on signals the US economy is slowing.  Gold rose for the 2nd straight day as Greek bailout talks stalled, driving the € lower & boosting the appeal of the precious metal as a haven.  The € plunged (almost 3¢), the most in more than a month:

Below is a link on how major markets did today: 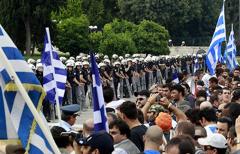 Prime Minister Papandreou said he will reshuffle his cabinet & seek a vote of confidence for his new gov in Parliament, after coalition talks with opposition parties failed.  The discussions came as anti-austerity riots hit central Athens after the gov Socialists proposed a new package of austerity measures.  The measures must be passed by Parliament before the end of the month if Greece can continue receiving funding from its intl bailout.  The Greek drama plays on & the clouds are darker.

Johnson & Johnson, a Dow stock & Dividend Aristocrat, will stop making & developing heart stents to focus on other stent types.  In a surprise move, JNJ producer of the first drug-coated heart stent, Cypher, will abandon it, with sales barely a quarter of their peak 5 years ago. At the same time, JNJ will cut hundreds of jobs, shutter 2 factories in Puerto Rico & Ireland, & take a charge of $500-$600M in Q2 as it restructures its Cordis heart device business.  "We watched the (drug-coated stent) market continue to evolve over the last several years," with rising competition forcing down prices, Seth Fischer, worldwide group chairman of Cordis said.  "In 2012, we expect to see new (drug-coated stents) come to the market," from 2 & possibly all 3 of its main competitors, Fischer said in explaining J&J's decision.  The stock dropped 94¢ to the 46s after a nice run in Apr.

The average price for gas at the pump is holding below $3.70.

Pandora (P) shot up to 26 from its IPO price of 16, but settled back to close at 17.42.  That describes the kind of day it was in the stock market.  Resolving Greek debt issues is the main concern for the markets, but right behind is dealing with raising the federal debt ceiling in the US.  Budget cuts will have to be made, a solid negative for GDP growth.  The Dow fell to just above where it was on Mar 18 & is headed to go below the 200 day moving average, considered an important line of support.  For what it's worth, Brown Foreman (BF-B), another Dividend Aristocrat, was up a nickel & another 13¢ after hours, on hopes their Johnny Walker business will be up.

Find out what's inside Trend TV!
Click Here
Posted by Avi at 4:48 PM