Stocks tried to to hold in there, but selling is returning.  Dow fell 49, decliners over advancers 5-4 & NAZ inched up 1. Once again, bank stocks are leading the way down taking the Financial Index to another 6 month low.

The MLP index fell another 1+ to 362 & the REIT index was down a fraction in the 262s.  Junk bond funds were higher & Treasuries sold off after yesterday's rally brought the yield on the 10 year Treasury to its lowest level this year.  Oil is holding above $100 & gold saw profit taking (but remains near its $1577 record high). 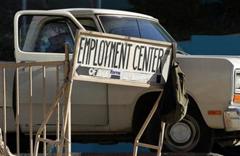 New claims for unemployment benefits fell last week, but not enough to relieve fears the labor market recovery has taken a step back.  Initial claims slipped 6K to 422K according to the Labor Dept, less than expectations for a fall to 415K. The gov is expected to report on Fri that employers hired 150K last month after increasing payrolls 244K in Apr. The 4-week moving average fell 14K to 425K.  Initial claims have been above the 400K level for 8 weeks in a row, a level associated with steady job growth.  The number still receiving benefits under regular state programs slipped 1K to 3.7M.  The number on emergency unemployment benefits rose 3K to 3.4M.  A total of 7.7M were claiming unemployment benefits.  This is another blurry report, clearly not good enough to support the bullish argument.


Steven Sinofsky, Microsoft Windows President, previewed a touch-screen version of the operating system that can work on tablets, the company’s response to the iPad from Apple (AAPL).  Windows 8 resembles MSFT’s software for mobile phones & uses “tiles,” rather than icons, to help users navigate between applications,  MSFT is rushing to adapt Windows so it can run on devices that compete with the iPad, which dominates the tablet market but the new operating system won’t be out until next year.  This was announced at a computer trade show in Taiwan, a major factor in the world of computers.  MSFT was flat after having gone nowhere for years & AAPL was up $1+ in the $346s following its stellar run during the same time period.

Asian markets sold off badly last night, typically down about 2%, following the market slide in NY.  European markets were lower & now US markets are being hit with more selling.  The financial mess in Europe lingers on with no end in sight.  The defeat of the attempt to raise the debt ceiling in Congress signals more problems ahead.  But the slowdown for the US recovery is probaly shaking markets the most.  Today's muddy jobless data was not encouraging.  Factory orders fell  in Apr because of parts shortages related to the aftermath of the earthquake in Japan.  Dow is heading for its 5th consecutive weekly decline as markets are bracing for disappointing news on the jobs front tomorrow.

Get your favorite symbols' Trend Analysis TODAY!
Click Here
Posted by Avi at 11:49 AM