Dow dropped 95, decliners over advancers 2-1 & NAZ fell 24.  Bank stocks led the way down with the Financial Index sinking to its lowest levels since Nov.

The MLP & REIT indices were each down chump change & junk bond funds were flattish.  Treasuries also were quiet, although the yield on the 10 year Treasury bond went below 2.9% (with QE2 ending next week).  Oil was flat, down sharply from its recent highs, & gold also marked time.

This video gives what's happening right now in the markets:

Durable goods orders climbed more than forecast in May, signaling manufacturing may be one of the first areas of the economy to rebound from a H1 slowdown in growth. Bookings rose 1.9% (beating forecasts of 1.5%) after a 2.7% Apr drop that was smaller than previously reported according to the Commerce Dept.  Record exports, the need for companies to update equipment & the easing of parts shortages stemming from the disaster in Japan, may boost manufacturing in H2.  The figures support the view by the Federal Reserve that slackening in the expansion is due to temporary restraints.  Orders for durable goods excluding transportation equipment, (i.e. commercial aircraft), increased 0.6% after a 0.4% decline in Apr.  These figures extended a recurring pattern of declines in capital equipment orders at the start of a qtr that are then reversed in the following 2 months. 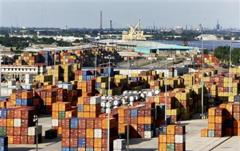 The economy grew at an annual rate of 1.9% in Q1 according to the Commerce Dep, up from a previously estimated 1.8% (in line with expectations).  This compares with a 3.1% rate in Q4 2010.  Some interpret this a a soft patch that will not last into H2.  The jump in commodity prices & shortage of auto parts stemming from the disaster in Japan have also restrained growth in Q1 are showing signs of improving.

U.S. Economy Expanded at 1.9% Pace in First Quarter, Above Prior Estimate

Oracle reported quarterly net income increased 36% as new sales of business software were at the high end of its expectations & revenue rose 13%.  But the hardware division stumbled.  CEO Larry Ellison has repeatedly said that he wants to focus of Sun's business only on higher-profit deals.  As a result, some lower-margin deals may fall off.  Now that Oracle has had Sun for a full year, the effect of this strategy is coming into focus.  EPS of 62¢ in fiscal Q4 (ending May 31) compares with 46¢ last year.  Excluding stock-based compensation & one-time expenses, ORCL earned 75¢, higher than the 71¢ expected.  Revenue of $10.78B was slightly higher than the $10.76B expected.  Software revenue rose 17% to $7.7B & revenue from new software licenses, a key metric for predicting future revenue, came in at the high end of its previous forecast.  But revenue in its hardware division was flat at $1.83B. Stronger sales of hardware support contracts masked a 6% decline in revenue from computers sold, disturbing investors.  The stock slid 1.34.

Markets are drifting lower as they see no signs of relief with confusion coming from Europe & DC.  It's anybody's guess what will happen with Greek debts.  In DC, the Reps refuse to talk about raising the debt ceiling, wanting it to be linked with budget cuts which seem far down the road.  The pres's way of leading was going to NY yesterday to raise some of the $1B he wants for next year's campaign.  That's called, first things first.  Stock markets are unsettled as they see no leadership.  The economy is sputtering, but the optimists are hoping it will pick up steam shortly.  Maybe maybe not.  That's holding advancing markets back.  Dow has fallen about 1K off its recent high 2 months ago.

Get your favorite symbols' Trend Analysis TODAY!
Click Here
Posted by Avi at 11:35 AM