Stocks sank at the opening & are trending lower.  Dow tumbled 214 (matching its 2011 lows made last week), decliners over advancers 5-1 & NAZ dropped 31.  Bank stocks are leading the selling, the Financial Index has been staying close to its 2011 lows for 3 weeks.

The MLP index & DJR index are each off 5+ to the lower end of their ranges in the last 2 months.  Junk bond funds were mixed, helped by the rally for Treasuries.  The yield on the 10 year Treasury plunged 7 basis points to its lowest level this year & the 2 year Treasury yields only 0.34% annualized.  Even gold saw significant selling.  Oil tumbled to the lowest price in 4 months after the International Energy Agency said it would release crude from strategic reserves.


Below is today's video & what's happening in major markets:

Jean-Claude Trichet, Central Bank President, said risk signals for financial stability in the euro area are flashing “red” as the debt crisis threatens to infect banks. “On a personal basis I would say ‘yes, it is red’,” Trichet said late yesterday after a meeting of the European Systemic Risk Board (ESRB). “The message of the board is that” the link between debt problems and banks “is the most serious threat to financial stability in the European Union.”  Trichet, chairman of the ESRB, made the remarks as European leaders meet in Brussels to discuss how to stave off a Greek default, while preparing a 2nd bailout. 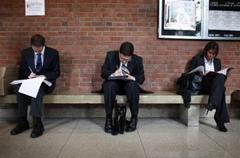 Claims for unemployment benefits rose more than expected last week suggesting little improvement in the labor market. Initial claims for benefits climbed 9K to 429K according to the Labor Dept, up from a revised figure of 420K in the prior week.  Expectations were for a count of 415K off a previously reported number of 414K.  The data is the latest in a series to underscore the weakness in the economy, which has persisted in Q2.  The 4-week moving average was unchanged at 426K & initial claims have now been above the 400K for 11 weeks in a row (a level associated with a stable labor market).  The number still receiving benefits under regular state programs was little changed at 3.7M & the number on emergency unemployment benefits rose 5K to 3.3M.  7.54M were claiming unemployment benefits under all programs.  More gloomy data on the unemployment front.

Fewer people bought new homes last month, the latest sign that the struggling housing market won't rebound this year.  New-home sales fell 2.1% in May to an annual rate of 319K  according to the Commerce Dept, far below the 700K home rate sold in a healthy housing market.  The median sales price rose 2.6% from Apr to $222K, more than 30% higher than the median sales of price of older, re-sale homes. Housing remains the weakest part of the US economy. Sales of new homes have fallen 18% in the 2 years & last year was the worst for new-home sales on records dating back half a century.  Larger down payment requirements, tougher lending standards & high unemployment are preventing people from buying homes.  What's there to say to this data?

Sales of U.S. New Homes Decreased in May


The chart below focuses on Dow in Q2, it has been a nasty qtr.  Dow is back to where it was in Feb.  I am constantly reminded about all those analysts revising their estimates upwards in Dec.  So much for that advice.  Even gold is taking a beating.  The Greek question needs an answer & it looks to be a long way off which will bring even lower markets.  Dow is up only about 330 YTD.  Grrr!