The MLP index also benefited from oversold conditions, up 2 to the 257s but the REIT index fell 2 to the 238s.  Junk bond funds were higher, bouncing back from recent weakness.  Treasuries were flattish with the yield on the 10 year Treasury remaining under 3%.  Oil increased for a 3rd day (to over 101) after OPEC’s failure yesterday to reach an agreement on production targets for the first time in at least 20 years.  Gold was about even. 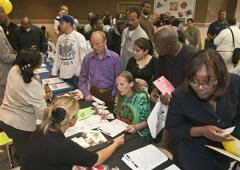 The number seeking unemployment benefits hardly changed for a 2nd straight week.  Unemployment applications ticked up 1K to 427K according to the Labor Dept, the 9th straight week in which applications have been above 400K.  Applications had fallen in Feb to 375K, a level that signals sustainable job growth & stayed below 400K for 7 of 9 weeks. But applications surged in Apr to 478K, an 8-month high, & have been stuck above 400K since then.  The 4-week average dipped to 424K, its 3rd straight drop but remains higher than at the beginning of the year.  The number receiving unemployment benefits fell 71K to 3.7M.  That doesn't include the millions of people receiving extended benefits under emergency programs set up during the recession. All told, 7.6M obtained unemployment benefits in the latest reporting week, a drop of 90K from the prior week. Some of those no longer receiving benefits may have gotten jobs, but many likely used up all the benefits available to them.  This data continues to be glum.


European govs & the IMF would lend as much as an extra €45B ($65B) to Greece under an expanded plan to avoid the area’s first sovereign default (according to reliable sources).  European estimates put Greece’s 2012-14 financing gap at as much as €170B.  It would be filled by the loans, plus €57B in unspent aid from last year’s bailout, roughly €30B in asset-sale proceeds & about €30B in rollovers by creditors, but there is opposition to this idea in Greece.  Germany, the biggest aid contributor, is trying to saddle bondholders with part of the cost to persuade the German parliament to offer new loans in another 3-year package to a country that has veered toward financial meltdown even after getting a €110B lifeline in 2010. The Greek drama plays on & nobody knows where it will lead.

Greece Is Said to Require $65 Billion More in Emergency Loans From EU, IMF 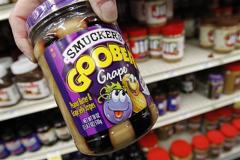 JM Smucker the maker of Folger's coffee, Jif peanut butter & namesake jams, reported that its Q4 fell on acquisition costs & other one-time charges.  EPS was 82¢ in Q4, down from $1.01 a year earlier.  After adjusting for its acquisition of Rowland Coffee Roasters & restructuring costs, EPS was $1, beating the 99¢ estimate.  Revenue rose 11% to $1.19B, primarily due to price increases.  SJM expect higher costs in the coming year for nearly all key commodities, with the biggest increases in coffee, soybean oil, flour & peanuts, anticipating costs will rise 25% (excluding Rowland Coffee).  The company expects EPS of $5.00-$5.15 in fiscal 2012, excluding one-time costs that are expected to total 55-60¢ on revenue of $5.79B.  The stock rose 1.81.

Markets were not meant to go down every day.  After more than a week of declines, buyers are back.  But it does not look like they have conviction.  Jobless data is dull & Greek debt is a mess.  The best that can be said for the Dow is that is held above 12K which is becoming an important support level.

Get your favorite symbols' Trend Analysis TODAY!
Click Here
Posted by Avi at 11:40 AM