Dow rose 38, advancers barely ahead of decliners & NAZ climbed 12.  The Financial Index rose 1+ to 239.  The MLP index gained 3 to the 433s, essentially at its record, & the REIT index rose 2+ the 283s for a new mutli year high.  Junk bond funds edged higher & Treasuries pulled back as stocks rose.  Oil went below 90 & gold did little.

While Apple is hard at work on a television to drive the next era of growth, its wristwatch-style device, still in development, may prove more profitable.  It is believed that the global watch industry will generate more than $60B in sales in 2013.  That’s smaller than the pool of revenue coming from TVs & gross margins on watches could be about 60% (bigger than for TVs).  AAPL is poised to tap into the growing watch industry which would help compensate for slowing growth in other areas such as iPhone & iPads.  AAPL has a team of about 100 product designers working on a wristwatch-like device that may perform some of the tasks now handled by the iPhone & iPad.  Features under consideration include letting users make calls, see the identity of incoming callers & check map coordinates.  It could also house a pedometer for counting steps & sensors for monitoring health-related data, such as heart rates.  The stock dropped 11 to 419 (down nearly 300 from its recent highs) on the leaked news.

US airports, including the busiest, are already experiencing delays in customs waiting lines as a result of automatic federal spending cuts, Homeland Security Secretary Janet Napolitano said.  But the Federal Aviation Administration reported there were no significant flight delays.  Napolitano said delays will become worse.  The Transportation Security Administration & Customs & Border Protection agencies (CPB), which are part of the Homeland Security Department, are in the process of issuing furlough notices & have cut overtime for employees.  CBP said that weekend delays were caused by "reduced primary booth staffing" because of cuts to overtime & wait times on arriving flights could have exceeded 2 hours, & passengers on some flights waited more than 3 hours.  TSA said that it expects to have about 1000 vacancies by Memorial Day & as many as 2600 by the end of the budget year in Sep.  Napolitano expects a cascading effect during the week, with wait times expected to double in worst cases.  This is part of a policy to punish taxpayers for a dysfunctional DC.  We will make you sorry!!! 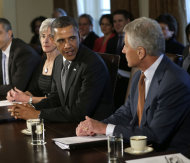 The pres presided over the first meeting of his new-look Cabinet in a sobering climate of forced fiscal belt-tightening, urging humane management of spending cuts for communities & families that are "going to be hurting."  Obama said he's continuing to seek out Rep partners to reach a deal to end the sequester, but there was no sign that a breakthrough was in the works to reverse the $85B in budget reductions that went into effect Fri.  "We are going to manage it the best we can to minimize the impact on American families," the pres.  "It's not the right way to go about deficit reduction."  Obama sat next to his newly confirmed Defense Secretary Chuck Hagel, with new Treasury Secretary Jack Lew across the long oval table, next to VP Joe Biden.  Obama said his team also planned to discuss other priorities for his 2nd term, including immigration reform, gun control & expansion of funding for preschool.  There was no mention of fiscal reform!!  Both sides are far apart & a shutdown of gov because of lack of funding is only about 3 weeks away.

Obama says his team managing cuts best they can AP


Stocks got thru the first day of federal budget cuts with little damage.  Nobody knows where the the cutbacks will take us, but these cuts will pinch the economy & that will get worse over time.  It's interesting that REITs are doing well because some still have high yields with tax advantages as a bonus.  There are no shortage of buyers for MLPs as they are building more infrastructure to supply energy for the US & the rest of the world.   Dow continues to hold very near its record highs although it has been not able to set new records for more than a month.  Bulls are out there, but it remains overbought (vulnerable to a sell-off).