Dow surged 180 despite dismal earnings reports, advancers ahead of decliners 4-1 (could have been a bigger spread given the size of the rally) & NAZ gained 42.  Bank stocks led the way higher.  The Financial Index soared 8+ to the the 172s (up over 20 in Oct).

The MLP index rose 2+ to 360 & the REIT index was up 8+ to the 215s.  Junk bond funds were a little higher, not really participating in the rally even though junk bonds are thought of as stocks with high yields, & Treasuries were pretty much even.  Oil rose to the highest level in one month as US stocks rallied raising hopes that economic growth will stabilize.  Gold prices fell as inflation worries started to ease.  The VIX, volatility chart, fell almost 2 to the 31s as stocks rallied. German Chancellor Merkel said that an EU summit in 5 days will mark an “important step,” though not the final one in solving the euro-area sovereign debt crisis.  “These sovereign debts have built up over decades, so they won’t be ended with one summit,” Merkel said.  While European officials recognize their responsibility to stop the crisis, “this will require tough, long-term work.”  The comments marked the 2nd time in 2 days that she sought to lower expectations that the European crisis-fighting effort would climax at the Oct 23 meeting.  Earlier today, she said at her Christian Democratic caucus that officials from the 17-nation euro area are moving millimeter by millimeter on solving the crisis.  She said the summit “is an important step, but that further steps will follow again after that.”  Germany will be THE most important country at the meeting.  Is anybody listening to her words? 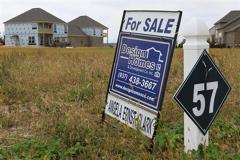 US homebuilders were less pessimistic in Oct than forecast as near record-low borrowing costs & price decreases raised hopes the market will turn for the better over the next 6 months.  The National Association of Home Builders/Wells Fargo sentiment index climbed to 18, the highest level since May 2010, from 14 in the prior month.  Economists projected the measure would rise to 15.  However, it remains significantly below 50 (meaning more respondents said conditions were poor).  Federal Reserve measures to boost demand & spur job growth combined with concern over the European debt crises have helped reduce mortgage rates, making buying more affordable.  At the same time, the prospect more foreclosures will enter the market & with unemployment above 9% mean it will take a long time for any recovery to develop.  A tiny bit of good news in a very depressed area.


China’s GDP gain of 9.1% was less than the estimate of 9.3% by economists & follows a 9.5% gain in the previous 3 months. Along with other signals, growth in China may be slowing as it feels effects from softer markets around the world in recent months.  This news along with dismal earnings could not keep buyers out of the markets.  Markets began the day underwater, then started rising.  Demand did not let up until the close when Dow pulled back 75 after topping 10.6K.  This was quite a performance considering it was not backup up by the news.  There are hopes Goldman Sachs (GS) & Bank of America (BAC) will turn around.  One analysts sees BAC doubling, possibly even tripling, from these depressed levels.  I'm not convinced.  Tomorrow the bulls will try to break thru the ceiling of 10.6K again.

Find out what's inside Trend TV
Click Here
Posted by Avi at 4:42 PM