Dow exploded, gaining 339, closing slightly below its highs & topping 12K, advancers over decliners 7-1 (below earlier levels) & NAZ jumped 87.  Banks soared, there's no other way to describe it.  The Financial Index shot up 11 to the 189s, but is still down 16% YTD.

The MLP index rose only a fraction in the 372s & the REIT index flew up over 10 to the 234s.  12 month charts for both are shown below to give a better idea of the enormous rally in Oct.  Junk bonds were up a more moderate 1% & Treasuries sank with that money going into the stock market.  The VIX, volatillity index, tumbled 4+ to the 25s on easing fears.  Oil is climbing on positive economic news for the US & Europe.  Gold only had a modest gain. Time Warner Cable reported a small decline in Q3 earnings, shy of expectations as it continued to lose subscribers to its video service.  The country's 2nd biggest cable company continued to see a defection of video customers even as its high-speed Internet subscriber base grew.  CEO Glenn Britt said TWC showed "steady financial progress" in Q3, helped by residential broadband & business services & added that the company saw stronger subscriber results in Aug & Sep.  EPS was $1.08 compared to $1 last year (while net income fell 1%).  Revenue grew 4% to $4.9B.  Expectations were for EPS of $1.13 on revenue of $4.95B.  Residential services revenue climbed 2% to $4.3B & business services revenue jumped 35% to $387M.  Growth in the number of high-speed data subscribers helped boost results.  But advertising revenue fell 3% to $216M.  The market didn't like the news, sending the stock down 5.46 (8%). 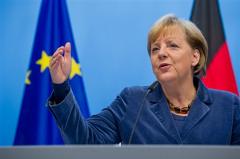 European leaders bought time to work out more lasting solutions to the debt crisis. Today's 3-pronged deal appears to have met or beaten expectations for some kind of decisive action.  It retools the eurozone's underpowered bailout fund, calls on banks to take 50% losses on Greek bonds & orders them to raise €106B in new capital by Jun.  But European leaders will have to work out the complex financial details quickly & skillfully.  It's unclear whether the bailout fund changes will be enough to prop up Italian & Spanish banks, or whether the bond writedown will be enough to pull Greece from the brink.  The debt crisis is still far from over.  The hope is that the 3 measures crafted will give European countries some breathing space within which to focus on getting their economies growing again to reduce debt & boost confidence in the region's financial markets.  That's called, "High hopes."  The most difficult part of the plan was persuading banks to take 50% losses on their Greek bonds.  The deal will cut Greek debt to 120% of economic output by 2020, from 180% otherwise.  Yet debt of more than 100% of GDP is still breathtakingly high.  Eurozone finance ministers are to work out the terms of the scheme in Nov, but there are already doubts about how leveraging the bailout fund's limited resources will work.  This deal which the markets love today, is still just a work in progress.

Eurozone wins respite, but it could be brief AP


With this rally, you would think Santa Claus brought gifts for everybody.  Not so.  Disappointing earnings caused stocks to sell off.  Dull economic keeps coming.  Pending home sales dropped 4%, but that got lost today.  Dow is up almost 1.3K this month, one its best months in history & there is explanation.  The European debt mess has not gone away.  The super committee will come up with its recommendations to reduce federal spending.  Early word is that is not going well.  Both sides are playing hardball!  Let's see what tomorrow brings to the markets.