Dow rose only 7, after being favorable all day - decliners ended ahead of advancers 3-2 & NAZ dropped 22.  Late day selling in bank stocks gave the Financial Index a loss & it continues to have a dreary chart.  Banks are supposed to be market leaders, especially in up markets.

The MLP index continues its upward climb during the last month but late day selling limited its gain today.  The REIT index fell a fraction to below 222.  Junk bond funds inched up & Treasuries were flattish with yields at or near record lows.  Oil gained in sympathy with the rising stock markets.  Gold has settled into the 1800s, after having one of the best rises this year. 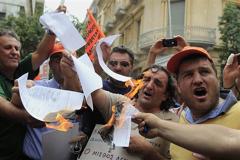 Evangelos Venizelos, the Greek finance minister, held new talks with intl debt inspectors yesterday, trying to convince them that its delayed cuts & public sector reforms are enough to keep up the flow of rescue loans.  The €8B ($11B) loan had been expected this month, but the creditors have said a decision will not be made until early Oct.  Without that money, Greece's cash reserves will run out around mid-Oct, forcing a default.  Many still think the country will have to restructure debts at some point, especially if the economy remains mired in recession.  "Greece's participation in the eurozone and the euro is an irrevocable and fundamental national choice that the Greek population is making sacrifices to safeguard, in full knowledge of how priceless it is," Venizelos said, rejecting a report that the gov was considering a referendum on the issue.  German Chancellor Angela Merkel has also had to quell fears of a euro break-up, a scenario elected officials in her own gov speculated about last week.  Confusion continues.

Greece in new talks with debt inspectors on loans AP

Caterpillar, a Dow stock, Aug sales rose 34%, with strong growth continuing despite the economic slowdown in the US & Europe where sales rose 37%.  This data is watched closely because it is considered an indicator of the health of the global economy.  The strongest regions for sales were Latin America, with 43% sales growth, & a region encompassing Europe, Africa & the Middle East, where sales rose 46%.  Engine sales rose 14% worldwide in Aug.  But the stock fell 94¢.

Apple (AAPL) had another robust gain until selling in the PM.  It closed up 1.82, but that was 9 below its record highs reached in the AM.  Banks suffered a similar fate.  The Financial Index was up more than 2 but selling brought it into the red at the close.  Troubling stories about a sluggish US economy & the European debt crisis have been ignored.  That disconnect may not last.  A late story is the IMF said the US credibility is at stake if it fails to cut debt.   Ben better come up with a biggie, anything less & the markets sell off.