Dow fell 26 (110 below its earlier highs), advancers ahead of decliners 3-2 & NAZ gained 10.  Banks stocks were a little higher, but again slipped from earlier highs.

The MLP & REIT indices were only fractionally changed while junk bond funds drifted lower.  Treasuries were weaker, but yields remain near record low levels.  Oil climbed for a 2nd day on speculation oil stockpiles dropped in the US.  Gold gained on concern that the European debt crisis is escalating & the dollar’s drop spurred demand for an alternative asset.

Angela Merkel tried to calm market fears that Greece is heading for a chaotic default as Europe struggles to contain a crippling financial crisis.  She rejected the notion that a Greek bankruptcy, a possibility raised a day earlier by her deputy that spooked markets, would provide a quick solution to the eurozone debt crisis.  Instead she argued that Europe needs to stick to its efforts to cut budget deficits & improve its competitiveness.  Resolving the crisis would be "a very long, step-by-step process." Fears of an imminent Greek default pushed interest rates on the country's 10-year gov bonds up to a new record, over 24 %, although Merkel sounded optimistic regarding Greece's chances of getting the next batch of bailout cash.  "We must always keep in view that we do everything we do in a controlled way, that we know the consequences, because otherwise a situation could very quickly arise in the eurozone ... that none of us wants and that could have very, very difficult consequences for us all," Merkel said.  She suggested that even an orderly default couldn't come any time soon, noting there wasn't even a mechanism in place for a eurozone nation to default.  She brought some calm to an intense storm. 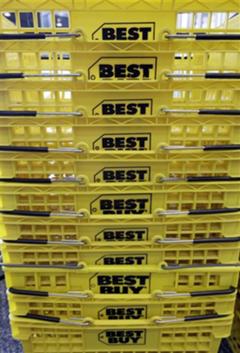 Best Buy Q2 net income fell 30% as consumers hit the pause button on buying electronics, particularly TVs & smart phones, while fears about the global economy persist.  "Results in the second quarter and our outlook reflect continued macro challenges to overall consumer spending and lower consumer electronics industry sales," said CEO Brian Dunn. But he said the company is "well positioned" for the holiday season.  The lack of a major smartphone introduction also hurt results.  EPS fell to 47¢, for the 3 months ended Aug 27, from 60¢ last year. Analysts expected 52¢.  Revenue edged up to $11.35B from $11.34B, but analysts expected $11.47B.  Revenue in stores open at least one year fell 2.8%.  Sales of tablet computers, appliances & e-book readers outperformed other categories while TV & video game sales were weaker.  BBY now predicts 2011 EPS of $3.35-$3.65, including a benefit from share repurchases of 20-25¢. Excluding that, the outlook is lower than its previous guidance for EPS of $3.30-$3.55.  Analysts, expect EPS of $3.45.  The company revenue guidance of $51-$51.2B  was reaffirmed & analysts predict $51.99B.  The stock fell $1.81.

Boeing, a Dow stock, said airlines are still buying new aircraft despite renewed fears about a slowdown in the US & Europe.  But the order growth is being driven mostly by low-cost carriers in emerging markets like China & India.  Many airlines are also focusing more on fuel savings & looking to replace aging fleets with newer, more efficient models.  Delta Air Lines (DAL) last month confirmed its plan to buy 100 Boeing 737 jets as part of a fleet upgrade, with delivery set for 2013-2018.  American Airlines (AMR) in Jul announced plans to split a massive order between BA & rival Airbus (the biggest plane order in history).   But the order spelled the end for BA exclusive grip on the airline's fleet.  20% of commercial plane demand is for models to replace older gas-guzzlers & this segment should keep "demand strong through uncertainty."  All commercial airplane segments "are large and growing," including single & twin-aisle planes & the services segment, which performs duties like aircraft maintenance & training. As airlines continue to focus on reducing costs, they are outsourcing more work on their fleets.  The stock rose 62¢.

There is not a lot going on in the markets while they await new developments in Europe.  Markets had risen on European bailout optimism but that enthusiasm is slipping.  Attention is being diverted from DC where more big financial battles will take place.  Early signals are that DC discussions about the new tax/spending package will not go well & markets don't like that discord.

Get your favorite symbols' Trend Analysis TODAY!
Click Here
Posted by Avi at 11:36 AM