Stocks plunged at the opening following a drab jobs report.  Even with a modest recovery Dow is down 183, decliners over advancers almost 6-1 & NAZ fell 39.  Bank stocks are leading the decline.  Earlier this week the Financial Index was breathing on 180.

The MLP index fell 4+ to below the important 350 technical level & the REIT dropped 3+ to 222.  Junk bonds were 1-2% lower but Treasuries were strong.  The yield on the 10 year Treasury is below the record low 2.1% at last month's auction.  Oil fell, giving up most of a 2nd weekly gain after a report showed employment in the US unexpectedly stagnated in Aug.  But gold is flying, the most in almost 4 weeks after the gloomy jobs report boosted demand for safe haven assets. 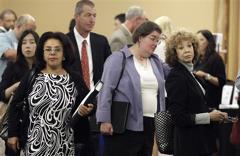 Employers stopped adding jobs in Aug, a setback for an economy that has struggled to grow & might signal a risk of another recession.  The gov also reported that the unemployment rate remained at 9.1% with the weakest jobs report in a year.  But a strike by 45K Verizon workers lowered the job totals & those workers are now back at work.  The weakness in employment was underscored by revisions to the jobs data for Jun & Jul. Collectively, those figures were lowered to show 58K fewer jobs added (all in gov jobs).  The average work week also declined & hourly earnings fell 3¢ to $23.09.  This gloomy news was not well received on would otherwise would be a slow day going into a long weekend.


Employment in U.S. Stagnated in August 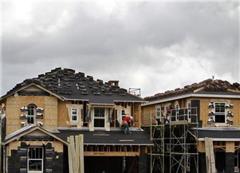 A US regulator is filing suits against major banks, accusing them of bundling subprime home loans into bonds that never should have been sold to investors, & causing mortgage giants Fannie Mae & Freddie Mac to lose billions.  The Federal Housing Finance Agency, which oversees Fannie Mae & Freddie Mac will deepen the mortgage litigation morass for banks.  The biggest banks already face the potential for tens of billions of payouts to settle regulatory charges of abusive mortgage lending & foreclosure practices along with other investor lawsuits over mortgage losses.  Banks to be sued are believed to include Bank of America & JPMorgan Chase (both Dow stocks) & Goldman Sachs among others.  Bank stock have been hit hard all year & these sold off again today.  BAC fell 51¢, JPM was of 1.38 &  GS down 5.53, all with about 5% losses.

The jobs report was bad, at the bottom of most expectations.  The economic recovery is sputtering, &, if anything, conditions are getting worse.  Next week, when Congress returns, there will be clamor for it to do something (i.e. spend more) while at the same time it will work on reducing the deficit.  European debts problems have not gone away.  Bailout II for Greece is still "iffy."  Dow is down almost 300 so far in Sep & also lower YTD.  How many predicted all these difficulties at the end of 2010?

Get your favorite symbols' Trend Analysis TODAY!
Click Here
Posted by Avi at 11:38 AM