Markets tumble after economy failed to create jobs in August

Dow plunged 253, decliners over advances 5-1 & NAZ dropped 65.  Banks were leaders in the decline, the Financial Index dropped a very large 7.  With a fragile recovery, banks are supposed to be lending more but the lawsuit involving mortgage problems filed today will only make banks more cautious when lending.  That's another major kick in the head the economic recovery does not need.

MLPs & REITs sold off along with the stock market.  The Alerian MLP Index is back below 350.  Considering how many times it has been crossed it, it may not be all that significant.  Junk bond funds fell about 1%.  Treasuries rose, pushing 10-year yields below 2% (the 2 year note has an annual yield of only 0.2%), as the payroll report showed no jobs, stoking speculation that the Federal Reserve may consider additional stimulus measures to boost the economy.  Oil fell with the prospects for slower global economic growth.  But gold is soaring, heading for new records above $1900.  It's up an astonishing $500 YTD & is on an 11 year winning streak.  Find a stock that can match that record!

The IMF opposes European plans to force Greece to put up collateral for bailout II.  The use of collateral, a concession to win Finland’s backing for €109B ($155B) of loans pledged by euro leaders in Jul, would deny the IMF priority creditor status & violate Greek bondholders’ rights claims the IMF.  This threatens to create a snag in the crisis-management effort after aid of €256B for Greece, Ireland & Portugal failed to restore order. There are also hurdles in trying to widen the powers of its rescue fund, with German lawmakers demanding a veto over its operations.  Greece’s predicament deepened today with the forecast of a worsening economic contraction & a 2-week suspension of a European-IMF economic review mission to give the gov time to plot a pro-growth course.  2-year Greek yields rose today above an astonishing 47% (a euro-era record)! 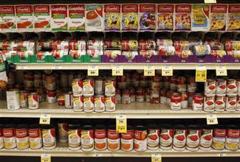 Campbell Soup reported higher-than-expected quarterly results, helped by fewer promotions in its US soup business.  Instead, Campbell put more money into advertising.  The strategy boosted earnings but led to a 9% decline in soup sales as some customers apparently switched to cheaper brands.  Fiscal 2012, which began Aug 1, will be "a year of transition," said CEO Denise Morrison.  CPB said fiscal-year sales would be unchanged to up 2%, with earnings before special items declining 5-7%.  In Jul it forecast a 4-6% earnings decline.  The new earnings forecast had more to do with fiscal 2011 earnings being higher than expected than with any anticipated change in performance.  Morrison expects soup volumes to decline for the next 2 qtrs as the company continues to cycle deep discounts that spurred sales in the year-earlier periods.  Fewer promotions effectively raises the price of CPB foods.  In addition, prices were increased to offset higher commodity costs.  EPS was 31¢ in fiscal Q4, compared with 33¢ a year earlier.  Excluding restructuring charges, EPS increased 30% to 43¢ & analysts expected 38¢.  Sales rose 6% to $1.6B.  The stock fell 40¢ after already having a bad year.

Starbucks CEO Howard Schultz said US political leaders have created a "crisis of confidence" with their political wrangling that is wreaking havoc on the economy.  He wants to give a voice to all citizens by hosting a national telephone forum on Tues.  He's also running ads in the NY Times & USA Today featuring an open letter that urges Americans to participate in the forum & insist politicians end their hyper-partisan behavior.  "We must send the message to today's elected officials ... that the time to put citizenship ahead of partisanship is now," Schultz said in the letter.  Schultz already called on other CEOs to halt contributions to political campaigns until the nation's leaders become financially disciplined & stop their political wrangling.  The CEOs of more than 100 companies, from AOL to Zipcar, joined Schultz in his pledge.  Schultz said he was moved to hold the forum after receiving hundreds of emails & letters from citizens who were struggling to find jobs, keep their homes or send their children to school given the economic conditions.  "It looks like we struck a nerve with so many people," Schultz said. "I feel a personal responsibility to create a public dialogue and make a voice for people who feel like they can't be heard."  The forum will be hosted by nonpartisan group No Labels & held the same week as the GOP presidential debate & the President's address to a joint session of Congress to share his plan for job creation.  DC is a terrible mess, good to see somebody is trying to straighten it out.

This was a bad day for the markets which are starting off difficult Sep on the wrong foot.  Dow fell almost 400 & the political wrangling about reducing the deficit has not really gotten started.  Howard Schultz has the right idea, but not sure how much good his forum will do.  At a minimum, it's a vivid  reminder that there are a lot of ugly financial problems out there & not a lot is being done to solve them.  Then there's Greece & the rest of Europe.  A day of reckoning could be coming in Sep.  Aug was a bad month for the stock market & it looks like Sep will live up to its reputation for being the worst month of the year.