Dow tumbled 375 (at its lows), decliners over advancers 7-1 & NAZ sank 69.  Banks led the charge down taking the Financial Index to another almost 2½ year low.

The Alerian MLP Index toppled 8½ to 345 & the REIT dropped 4 to the 206s.  Junk bond funds were a little lower.  Treasuries rose with the yield on the 10 yearTreasury falling to another record low.  Oil fell to a one-month low after the Federal Reserve cited “significant downside risks” to the economy of the US.  Gold also sold off, bringing it almost $200 below its recent record highs.

Applications for unemployment benefits dropped 9K to 423K according to the Labor Department.  The 4-week average rose slightly, for the 5th straight, week to 421K.  The economy may see some job growth in Sep after none in Aug, but that could largely come from 45K Verizon workers going back to work.  Many businesses pulled back on hiring this spring after seeing demand for their products drop. The number receiving unemployment benefits fell (3rd time in 4 weeks) to 3.73M.  But that doesn't include more than 3M receiving extended benefits under emergency programs.  All told, about 6.9M received unemployment aid in the latest week, down about 250K from the previous week.  Today, few care about this data.. 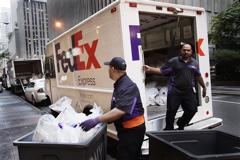 FedEx cut its earnings expectations for the fiscal year ending in May due to slowing global economic growth.  FDX said the biggest factor dragging on global growth is lower consumer demand for technology & electronics products from Asia.  UPS (UPS) also said last week that growth is slowing around the globe.  "Our customers' hair is not on fire. They're just saying we're taking it steady as she goes. It just feels completely different than it did back in `08," CFO Alan Graf said.  FDX now expects to earn $6.25-$6.75 for fiscal 2012, compared with a previous estimate of $6.35-$6.85.  For the fiscal Q1 that ended in August, an increase in deliveries by truck offset a drop-off in shipments by air.  EPS rose to $1.46 compared with $1.20 a year earlier.  Revenue rose 11% to $10.5B.  Express shipments slowed most notably from China, where growth had been robust.  The stock fell 5.06 to its lowest level since the last recession.

Greece will accelerate budget cuts to keep emergency loans flowing & extend austerity measures that have deepened a recession.  Public-transit workers unions will hold a second 24-hour strike tomorrow to protest cuts in civil servants’ wages & pensions.  The latest round of deficit fighting was demanded by lenders to ensure Greece reaches targets in a €110B ($151B) bailout due next month.  Measures announced yesterday following 2 rounds of talks with the EU & the IMF include: a 20% cut in pensions of more than 1200€ ($1,650) a month; pensions paid to those younger than 55 will be shaved by 40% for the amount exceeding 1000€ & wages will be lowered for 30K state employees.  Greek creditors are also in the final stages of negotiating a bond exchange intended to reduce the country’s debt load of about €350B.  The Greek drama plays on.

Stocks are recognizing that the US economic recovery has major problems.  Operation Twist by the FED is another indication that the economy needs a lot of help.  The low for the Dow in Aug was 10,720.  All of a sudden, it's very close.  If that does not hold, the next major test could be 10K which isn't that far away.  The strong should not lose heart.  Declining markets bring buying opportunities for quality stocks with attractive yields.