The Alerian MLP Index fell 1+ to below 350 & the REIT index was off 3 to the 222s.  Junk bond funds were weak but Treasuries rose, taking the yield on the 10 year Treasury below 2%.  Oil fell the most in a week as speeches yesterday by the president & Ben Bernanke didn’t boost confidence in the world’s largest economy.  Gold also pulled back.

Photo:    Bloomberg
Tim Geithner said Obama’s $447B jobs plan would provide a “substantial” boost to the US economy (that's what he's supposed to say).  “I think we’ve got a good chance of continuing a moderate pace of growth coming out of this crisis,” Geithner said.  If Congress approves the plan, “it would dramatically reduce the risk of a long period of much weaker growth.”  But the president, speaking yesterday, DEMANDED that lawmakers act “right away” on his plan boost spending on infrastructure, stem teacher layoffs & cut in half the payroll taxes paid by workers & small-business owners.  “It would make a very substantial contribution to growth at a time when we need it to help get hundreds of thousands and more Americans back to work more quickly,” Geithner said. “Of course the impact it has depends on what Congress does, so we would like them to do as much as they can as quickly as they can.”  Geithner also expressed optimism about the reaction of congressional Reps.  I don't think so.

Jürgen Stark, a German who sits on the executive board of the European Central Bank (ECB) & is known as an opponent of the bank’s bond-buying program, will resign his post.  His surprise departure, the ECB de facto chief economist, has generated speculation that he is leaving because he is unhappy about the bank’s continuing intervention in bond markets.  Jörg Asmussen will replace him, a deputy minister in the German Finance Ministry who has been a key figure in negotiations with other euro countries on how to deal with the sovereign debt crisis.  The bond buying program outlook is unclear, not good for stocks! 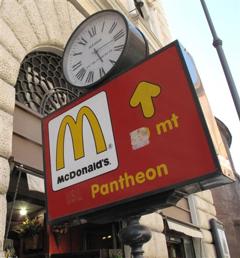 McDonald's, a Dow stock & Dividend Aristocrat, revenue at restaurants open at least 13 months climbed 3.5% in Aug, led by strength in the US &  Europe.  But the performance came in below expectations of 4.9%.  Revenue at US restaurants rose 3.9%, as customers continued to snap up McCafe drinks & the new Premium Chicken sandwiches.  Breakfast items were also strong sellers, including Fruit & Maple Oatmeal.  But the increase was below the 4.6% rise during the prior-year period.  In Europe the metric gained 2.7% from a solid performances in the UK & Russia.  Results in the Middle East, Africa & the Asia/Pacific dipped 0.3%, as strength in China & Australia was not enough to overcome softness in Japan.  The decline was a substantial drop-off from the 7.8% increase that the region reported last year.  Aug systemwide sales climbed 11.3%, or 5.4% in constant currencies.  The stock fell 3.62 but is having a good year when most stocks aren't.

Just another dreary day in the stock market.  Dow is down 550 in Sep & we've just completed the first week of trading.  The European debt crisis keeps going from bad to worse with no end in sight.  The new Stimulus II plan does not look like it will go anywhere, although some of the ideas weren't too bad.  But the big problem is that gov spending programs takes months to get started & then don't generate many jobs (with limited lives).  The concept of an economic recovery is not even mentioned these days.  Sep is not going to be a good month for stocks & that is followed by Oct which is best remembered for some of the ugliest days in stock market history.

The change in investor sentiment along with concerns about China sending stock markets in Asia and Europe in negative territory throughout the year.