Dow rose 186 closing at its highs, advancers over decliners almost 3-1 & NAZ gained 34.  Banks had another good day, but the Financial Index is only 12 above its recent lows.

The MLP Index had a good day but has not been able to get far away from the 350 level (10% below its peak earlier in 2011).  The REIT index gained 3 to the 224s but junk bond funds were mixed to lower.  Treasuries sold off on easing European debt worries.  Oil rose on hopes that an improved European situation will lead to more demand.  Gold fell sharply after 5 top central banks made a joint offer to support European banks to ease worries about the region's debt crisis.

Default notices sent to delinquent homeowners surged 33% in Aug from Jul, a sign that lenders are speeding up the foreclosure process after almost a year of delay.  First-time defaults were filed on 79K properties, the most in 9 months according to RealtyTrac.  Total foreclosure filings, which also include auction & home-seizure notices, increased 7% from a 4-year low in Jul to 228K.  One in 570 homes received a notice during Aug.  However on a year-over-year basis, foreclosure filings dropped for an 11th straight month after claims of “robo-signing,” or pushing through documents that weren’t verified, spurred an investigation by state attorneys general in Oct.  The jump in default notices from Jul, the biggest gain in 4 years, shows that bank paperwork delays are easing.  Total filings in Aug dropped 33% from a year earlier.  Default notices fell 18%, while scheduled auctions slid 43% from Aug 2010 & 1% from Jul.  Lenders seized 65K properties in Aug, a 4% decline from the previous month & a 32% slump from a year earlier.  The jump in default notices means repossessions probably will increase in coming months as more foreclosures are processed.  This gloomy news is a key factor explaining why the economic recovery has stalled.

Photo:   Bloomberg
Netflix lowered its expectations for US subscribers in Q3 by 4%, just weeks after separating its DVD & streaming services, which increased the price for customers who want both.  The company, which split its streaming & DVD-by-mail services 2 months ago, now expects 24M subscribers in Q3, down from the 25M it forecast in Jul.  It expects 21.8M to subscribe to its streaming service, either with or without also getting DVDs in the mail, down from an expected 22M it forecast earlier.  And Netflix expects 14.2M to subscribe to mail-order DVD rental service, with or without streaming, down from its Jul forecast of 15M.  NFLX kept its forecast for intl subscribers, which makes up a small fraction of its total customers, & overall Q3 earnings intact.  This had been one of the hottest stock in recent years, but no more.  The stock plunged $39.46 today (19%) to $169.25. 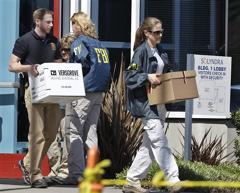 The Treasury Dept inspector general opened an investigation of a $528M gov loan to Solyndra, the now-bankrupt solar panel manufacturer once cited as a model of the Obama administration's clean energy program.  The inspector general is reviewing the role & actions of the Federal Financing Bank, a gov corp supervised by the Treasury Dep, because it provided a low-interest loan to Solyndra.  The Treasury investigation is the latest gov inquiry into the collapse of Solyndra.  The FBI has executed search warrants at Solyndra's headquarters (shown in the picture) & talked to top executives.  The Energy Dept inspector general & the House Energy & Commerce Committee also are investigating Solyndra & the DOE's Energy Loan Program, which has provided $B in loan guarantees to renewable energy companies. The loan loss will come from the stimulus money, the bill which had to be passed in a rush because it was soooo important to the economic recovery!!


Stocks are having a great week.  Dow is up 500, what else is there to say?  Major central banks seem to have solved European debt problems, at least for the time being.  Keep in mind, there were protests in Greece & Italy, austerity is not going down well with the local populations.  Then there is the problem of fixing the massive deficits in the US.  The fights have barely begun on that one.  Business leaders are cautious about investing in the future with the uncertainty coming from DC.  The VIX, volatility index, is down to 32, but it remains high relative to the mid teens where it had been during better periods in the markets.  This week, investors are happy.  Tomorrow will take care of itself. Find out what's inside Trend TV Click Here
Posted by Avi at 4:43 PM