Dow was up 75 (near it highs), decliners just edged out advancers & NAZ gained 15.   Banks hardly moved, the Financial Index gained only a fraction to 174 (still near its recent lows of 162).  The MLP index dropped a big 5 to the 348s & has a lot of trouble getting away from 350 in recent months but the REIT index was up 2 to 227.  Junk bond funds were a little higher as were Treasuries.  Oil tumbled the most in a week on concern that European leaders haven’t taken sufficient steps to contain the region’s debt crisis (a message lost in the stock market).  Gold has its best day this week on increased worries about European debts. Bank of America, a Dow stock, is burdened by its Countrywide takeover & may consider putting the unit into bankruptcy if litigation losses threaten to cripple the parent.  The bankruptcy option exists because the bank maintained a separate legal identity for the subprime lender after the 2008 acquisition.  A filing isn’t imminent & executives recognize the danger that it could backfire by casting doubt on the financial strength of the largest bank in the US & former proud Dividend Aristocrat.  Just before Countrywide was purchased, the firm was the biggest mortgage lender in the US with 17% of the market & $408B of loans originated in 2007.  Regulators later found its growth was fueled by lax lending standards, with loans marred by false or missing data about borrowers and properties.  The stock dropped a dime to 7.23. 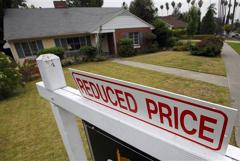 The wealth of Americans declined this spring for the first time in a year, as stocks & home values fell while corps increased cash stockpiles.  The combination could slow an already weak economy because it means businesses & consumers are spending less.  Household net worth dropped 0.3% to $58.5T in Q2, according to the Federal Reserve following 3 straight quarterly increases.  The value of Americans' stock portfolios fell 0.5% in Q2 & home values dropped 0.4%.  Meanwhile corps held a record $2T in cash at the end Q2, an increase of 4.5% from 3 months earlier.  Net worth is expected to fall even further in Q3 because stocks plunged in late Jul & early Aug. Overall, household wealth, mostly home equity, stock portfolios & other savings, has risen 15% since the recession officially ended in Jun 2009 due primarily to one of the fastest bull markets in history.  Stocks have doubled in value over the past 2 years.  But Americans' wealth has taken a hit since Q2 ended.  The S&P index has tumbled 11% since its Apr peak, & 8% since the end of Q2, implying  an even larger drop in household net worth in Q3.


U.S. Household Worth Declines by $149 Billion

Shares of Netflix continued to decline amid fallout from its lowered expectations for its US subscriber base. NFLX announced plans in Jul to split its DVD-by-mail & video streaming services, raising the price of a monthly subscription for people who still want both. The decision was met with anger from customers & yesterday NFLX lowered its guidance for US subscribers by 4% to 24M in Q3, saying more customers had dropped their subscriptions than it expected.  But NFLX kept its forecasts for its earnings & intl subscriptions intact.  Despite the subscriber exodus, NFLX maintains that the split was a good idea.  But investors may be worrying that this is just the start of the company's troubles.  The high flying stock has dropped in half in the last 2 months, down 13.90 today.

Dow was up over 500 this week, but is still down 100 in Sep.  The rally this week is difficult to understand.  There is a tremendous amount of hope that the European biggies have magic solutions to complicated financial problems.  At the end of the week, all we know is that the next round of bailout money for Greece was put on hold for another couple of weeks.  Domestioc problems have gotten little attention.  But congress has that super committee that is supposed to come up with $1½T in savings.  The deadline is 2 months away.  No solution means there will be cuts to the federal budgets.  DC is deeply divided, both sides quick to blame the other.  Sep has the reputation for being the worst month for stocks & 2 weeks are left.

I look forward to hearing from you shortly.