Nervous markets wait for word from the Federal Reserve

Dow dropped 47, decliners ahead of advancers 2-1 & NAZ was up 1.  Bank stocks are drifting lower.

The MLP index, which has been hot, pulled back a fraction in the 358s & the REIT index fell 1 to below 221.  Junk bond funds were mixed but Treasuries were a little higher taking the yield on the 10 year Treasury closer to 1.9%.  Oil dropped as European officials said they plan to return to Greece next week to complete a review of the economy.  Gold is marking time. 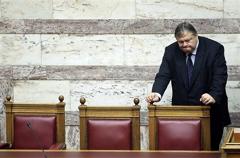 Greece needs to take fresh austerity measures the finance minister said, a day after Greece moved a step closer to getting the bailout it needs to avoid default next month.  But the prospect of more tax increases & spending cuts are likely to be met with mounting concern in a country mired in a deep recession & the number of unemployed rising to around one in 7.  "We have to take supplementary measures ... because of the recession, because of the difficult task, and the weakness of the central administration have not produced the required results," Evangelos Venizelos said in Parliament. Greece has been under pressure to meet fiscal targets & slash the size of its bloated public sector (more than 750K in the country of 11M).  It has already pledged to suspend 20K civil servants on reduced pay as part of a plan to shed 150K public jobs thru 2015.  It also recently announced a new property tax, to be paid through electricity bills to make it easier & faster for the state to collect.  But that plan has met with resistance, state electricity company unionists have threatened not to collect the tax & not to cut off the electricity supply to those who refuse to pay.  This is a grim situation which keeps getting worse.

The number who bought previously occupied homes rose in Aug.  But sales were driven by an increase in foreclosures, further evidence the housing market remains weak.  The National Association of Realtors said home sales rose 7.7% to a an annual rate of 5.03M homes.  That's below the 6M consistent with a healthy housing market.  Last month's pace was slightly ahead of the 4.91M sold in 2010, the weakest sales year in 13 years.  Homes at risk of foreclosure made up 31% of sales, up from 29% in the prior month.  First-time homebuyers were unchanged at 32% (normally they make up 50% of sales in healthy markets).


Adobe Q3 earnings edged past estimates & predicted it would finish its fiscal year with a flourish as its products help meet growing demand for online video, photos & other digital content on a widening array of devices.  ADBE had EPS of 39¢, during the qtr ending Sep 2, a 15% decline from 44¢ last year.  If not for expenses to cover employee stock compensation & other items unrelated to its ongoing business, ADBE would have earned 55¢, a penny above the average estimates.  Revenue rose 2% to $1.01B, falling about $15M shy of predictions.  Investors, though, focused more on the optimistic outlook.  Excluding certain items, ADBE projected fiscal Q4 EPS of 57-64¢ on revenue of $1.08-$1.13B.  The mid-range of that forecast put would put EPS at 60¢ on revenue of $1.1B.  The average estimate called for EPS of 58¢ on revenue of $1.07B.  Management expects its software, which includes Photoshop, Flash for video & Acrobat for documents, to benefit as people & businesses consume more content on computers, phones & tablets.  "Our industry is in the midst of a major transformation," said Adobe CEO Shantanu Narayen.  The stock was up 64¢.

There is not much happening as markets wait for Ben Bernanke to speak.  Operation Twist, where the Federal Reserve will sell short term Treasuries & buy longer term bonds, is expected to be announced, but nobody is sure how much good it will do.  Rates are already at record low levels & business is not inspired to expand.  There is a growing awareness that increased federal bureaucracy (with public servants earnings over $100K along with fabulous benefits) is hurting the economy badly.  Many businesses are afraid to expand & hire because of increased gov interference with more regulations.   In addition, looming budget cuts (less spending) are weighing on the markets.  There is a great potential that the markets could be disappointed by what they hear later today.

Get your favorite symbols' Trend Analysis TODAY!!
Click Here
Posted by Avi at 11:26 AM