Markets rally on hopes of another stimulus package

Dow shot up 275 (closing at the highs), advancers ahead of decliners 6-2 & NAZ rose 75.  Banks led the way higher on hopes European debt problems will evaporate.  Once more the Financial Index bounced off its 160 lows although wide swings (5+) are becoming common.

The MLP index had a moderate rise while the REIT index shot up 8½ to 228.  Junk bond funds were up roughly 1% & Treasuries sold off on reduced demand for safe haven investments.  Oil had an excellent day related to optimism in the stock market & supply problems in the Gulf.  Gold had a horrible day on the belief that European debt problems have evaporated (I don't think so).

Despite the turmoil that shook the financial markets last month, the Federal Reserve (FED) said its 12 bank regions grew modestly this summer because consumers spent more.  The FED survey noted that growth was mixed & some regions reported weaker expansion but the survey appeared to be an improvement from the previous report, which said growth slowed in 8 of its 12 regions in Jun & early Jul.  This survey looked at economic conditions from mid-Jul through Aug 26 & was based on reports provided by the 12 regional FED banks. Its outlook will help shape discussion at the next FOMC meeting on Sep 20-21. 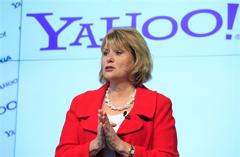 Yahoo stock surged after firing CEO Carol Bartz, whose reign was marked by falling sales, lost share to rivals & a dispute with Asian partners that stunted growth in the world’s largest web market.  CFO Tim Morse will be interim CEO.  Under Bartz, who took over in Jan 2009, YHOO has frustrated investors & failed to keep Google (GOOG) & Facebook from siphoning off users & advertising revenue.  There is speculation that this change may lead to the sale of YHOO at $18-20 per share.  The chart below shows the stock has gone nowhere while the rest of the market recovered from the recession.  Today the stock shot up 70¢ (5%) to $13.61 in a strong market.

Stocks surged ahead on high hopes that a major new stimulus package to inject more than $300B into the economy will bolster growth (some have been calling for a $1T stimulus package).  With a figure already given, that represents an "official" leak.  The last stimulus package was hastily put together & the sloppy package did not reduce unemployment.  Now that the Reps are in charge of the House, any proposal for more spending while there is pressure to reduce the federal deficit will have a difficult time gettimg approved.  European bailouts got approval from the main court in Germany (the #1 source of funds for any European bailout), but that alone is not going to solve fundamental problems that have been growing for years (even decades). Asian markets when they open should have solid gains.  But tomorrow, just prior to the big speech, could be another story in the US.