Dow dropped 119, decliners ahead of advancers 5-2 & NAZ fell 33 for a bigger pecentage loss.  Banks led the way down, the Financial Index had profit taking after its recent run up.

MLPs were hit with selling in the PM & the REIT index dropped 3½ to 226.  Junk bond funds inched higher & Treasuries were strong.  The yield on the 10 year Treasury remains near the record low 2.1% offered at its auction last month.  Oil & gold had small movements, but gold remains strong after selling last week.


The Institute for Supply Management factory index fell to 50.6 last month from 50.9 in Jul (figures greater than 50 signal expansion), better than a projected drop to 48.5.  Receding commodity prices & a recovery from setbacks related to the earthquake in Japan have helped keep US manufacturing from shrinking.  But another report showed consumer sentiment declined to the 2nd-lowest level in 2 years, posing a threat to the household spending that accounts for 70% of the economy.
Surprise U.S. Factory Growth Eases Recession Concern 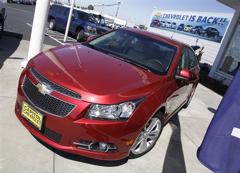 
Car buyers shrugged off bad economic news & a major East Coast hurricane last month, lifting sales for most automakers.  General Motors (GM), Chrysler, Ford (F) & Nissan reported surprisingly strong sales results.  Toyota (TM) & Honda, however, continued to be hurt by model shortages from the Mar earthquake in Japan & reported large sales drops.  Chrysler sales led the way with a 31% increase from a year earlier.  Sales for GM sales rose 18%, Nissan was up 19% & Ford reported an 11% increase.  TM sales were off almost 13%, while Honda sales were down 24%.  Both lost sales because of parts shortages.  Dealers ran short of many top-selling models.  Sales of the Toyota Corolla compact were down 19%, while Honda Civic sales were off 47%.  Better sales are expected in Sep because supply factories are returning to normal production.  Before the storm, JD Power was forecasting total sales of 1.07M for Aug, 4% higher than last year but still a much slower pace than at the start of 2011.  12M annual volume is considered fairly good, coming off depressed recession levels.  But in the good old days (a decade ago) the annual rates were over 16M.
Verizon, a Dow stock, is hiking its dividend 1¼¢ (2.6%) to 50¢ ($2.00 annualized), the 5th straight year the div raised was raised in Sep.  Last year's raise was also by 1¼¢.  The stock fell 28¢ to $35.88 & yields 5.4%.
In annual ritual, Verizon raises dividendAP

This looks to be the lowest volume day this year.  On such days, small amounts of buying or selling can bring on larger changes than usual.  That's what happened today.  News today was mildly encouraging, jobless numbers & retail sales.  But everybody is concerned with the Aug jobs report which will be reported before trading tomorrow.  Then there's next week when Congress returns, looking for ways to reduce the deficit, & we'll learn more about sovereign European debt problems,

Find out what's inside Trend TV
Click Here
Posted by Avi at 4:48 PM