US manufacturing contracted in Dec at the fastest pace in more than 6 years as factories, hobbled by sluggish global growth at the end of 2015.  The Institute for Supply Management index declined to 48.2, the weakest since Jun 2009, from 48.6 a month earlier.  Readings lower than 50 indicate contraction.  The forecast was 49. 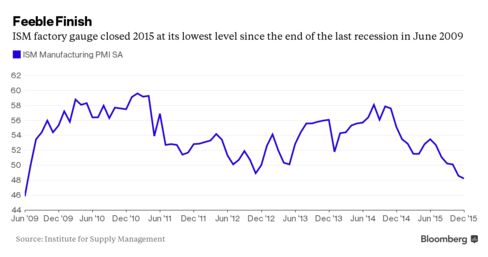 Struggling overseas demand & declines in commodity prices that are hurting investment in energy & agriculture continue to limit orders for American manufacturers.  At the same time, robust domestic growth buoyed by labor-market momentum & burgeoning wage gains are supporting consumer spending power & preventing US factory activity from slowing even more.  Factories globally ended the year on a weak note, contributing to a selloff in stocks worldwide on Mon.  Manufacturing in China contracted in Dec for a 5th consecutive month as the economy is poised to grow in 2016 at the slowest pace since 1990.  In the UK, manufacturing unexpectedly cooled in Dec, suggesting it made little contribution to the economy in Q4.  The euro area provided one bit of good news as the region's factories expanded in Dec at the fastest pace in 20 months.  Manufacturing grew in all nations covered, including Greece, for the first time since Apr 2014.  10 of the 18 US industries surveyed by ISM contracted last month, led by clothing, plastics & machinery.  While the ISM gauge of new orders improved to 49.2 last month from 48.9 in Nov, it still showed bookings were falling.  Order backlogs thinned to the smallest in 3 years.  The measure of export orders showed foreign demand surprisingly climbed in Dec for the first time in 8 months, signaling the worst may be over.  The index rose to 51 from 47.5 in Nov.  Conversely, imports dropped at the fastest pace in more than 9 years.  The slump in imports indicated factories were trying to cope with soft demand & attempting to limit inventories, ISM said.  Companies were cutting back on stockpiles of raw materials.


Manufacturing in U.S. Contracts at Fastest Pace in Six Years


Federal Reserve Bank of Cleveland pres Loretta Mester dismissed concerns over tumbling stock markets & said the US economy expansion was “on solid ground.”  “Underlying fundamentals of the U.S. economy remain very sound,” Mester said this AM.  “There’s going to be volatility in the markets, that’s kind of the nature of financial markets.”  Mester, who votes this year on the policy-setting FOMC, said she expects the US economy to grow 2.5-2.75% this year.  Her remarks came after the Dow Jones Industrial got off to its worst start to a year since 1932.  Investors were reacting to negative manufacturing data from Asia & a sell-off in Chinese stocks.  Mester was the 2nd Fed official to play down the market turmoil on today.  In an interview earlier, San Francisco Fed pres John Williams said the equities sell-off would have no impact on his medium-term forecast for growth in the US.


General Motors will invest $500M in Lyft, giving the ride-hailing startup a valuation of $5.5B & a major ally in the global battle against Uber.  The investment, part of a $1B financing round for Lyft, is the biggest move by an automaker to date when it comes to grappling with the meteoric rise of the ride-hailing industry.  GM & Lyft said they will work together to develop a network of self-driving cars that riders can call up on-demand, a vision of the future shared by the likes of Uber CEO Travis Kalanick & Google-parent Alphabet (GOOG).  More immediately, America’s largest automaker will offer Lyft drivers vehicles for short-term rent thru various hubs in US cities.  GM pres Dan Ammann, who is joining Lyft's board as part of the deal, expects the automotive industry to “change more in the next five years than it has in the last 50 and we obviously want to make sure we’re at the forefront of that change.”  Ammann called the investment an “alliance” with Lyft.  Rather than stay neutral in the battle between Uber & Lyft, GM invested because of the “level of integration and cooperation that will be required, particularly for the longer term nature of this,” he said.  Uber’s Kalanick, whose company has been investing aggressively in self-driving cars, has said that it could take 5-15 years before such vehicles are meaningfully deployed around the country.  GM is open to working with some of Lyft’s intl partners, which include Didi Kuaidi in China, Ola in India & GrabTaxi in Southeast Asia, Ammann said.  The stock fell 70¢ in this brutal day of trading.  If you would like to learn more about GM, click on this link:
club.ino.com/trend/analysis/stock/GM?a_aid=CD3289&a_bid=6ae5b6f7

The were some slightly bright spots today.  Stocks improved in the PM & market breadth had limited damage.  There was significant buying in the last ½ hour.  However, cheerless news about US manufacturing made it clear that the market is in deep trouble.  Next comes the test of performance in the first week, another indicator of how the stock market will perform this year.