The MLP index rose 1 to the 356s & the REIT index was up 3 to the 228s.  Junk bond funds edged higher while Treasuries slipped a tad.  Oil pared gains after a gov report showed an unexpected increase in inventories.  Gold climbed for a 3rd day as investors bought the metal as a hedge against inflation.

Companies paid higher prices for tobacco, pickup trucks & pharmaceuticals in Jul, driving wholesale inflation up by the most in 6 months.  This measure which excludes volatile food & energy prices (the core Producer Price Index or PPI) rose 0.4%, the biggest increase since Jan.  The overall PPI,rose 0.2% according to the Labor Dept following a 0.4% drop in Jun, the first decline in 17 months.  Gas prices fell for the 2nd straight month but food rose 0.6%, the biggest rise since Feb.  The jump in the core index is unlikely to continue because raw material prices are increasing at a slower pace than the finished goods tracked by the PPI.  Tobacco prices, which are affected by seasonal factors, jumped 2.8%, the largest increase in more than 2 years.  The PPI has increased 7.2% in the past 12 months, up sharply from earlier this year but below May's rise of 7.3% (which was the biggest in 2½ years). The core index increased 2½% in the past 12 months, the most in 2 years.  Inflation worries persist.


Wholesale Prices in U.S. Rose More Than Forecast in July


Corp & gov demand for PCs has been strong for the past year, but consumer demand has collapsed because of high unemployment & the lure of new gadgets such as tablet computers & smartphones.  Worrisome new economic signs  budget cuts threaten to hamper the recovery, casting doubt on the ability of DELL & other PC makers to lift themselves.  DELL lowered its revenue forecast for the fiscal year ending in Jan, blaming "a more uncertain demand environment" than previously envisioned & a decision to focus on more profitable deals.  In cutting its full-year revenue forecast, DELL cited “a more uncertain demand environment” & a strategy shift aimed at boosting sales of higher-margin products. Gov customers also have delayed spending. The public sector accounts for more than 25% of DELL sales.  Even as DELL tempered its revenue outlook, it said operating income would increase by as much as 23%, up from a previous forecast of up to 18%.  Acquiring technology for data centers & discontinuing sales of less profitable products have improved results.  Q2 EPS was 48¢, ahead of 28¢ a year earlier.  Excluding some costs, EPS was 54¢, beating projections of 49¢.  Dell fell 1.38 (9%). 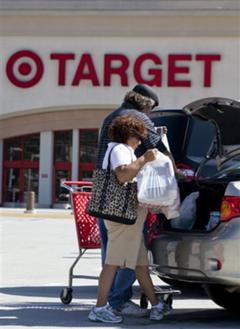 Target, a Dividend Aristocrat, posted a 3.7% increase in Q2 profit & said earnings for the year will beat estimates.  TGT is counting on 2 key initiatives to drive revenue, a larger food offering & its 5% discount it began offering in Oct to customers who pay with Target branded credit & debit cards.  As a result, TGT had a 3.9% increase in revenue at stores opened at least a year, up from a 2% pace in Q1.  "We're very pleased with our second-quarter financial results," said CEO Gregg Steinhafel. "We continue to focus on strong execution of our strategy, preparing Target to perform well in a variety of economic environments."  EPS was $1.03, for the qtr ended Jul 30. That compares with 92¢ last year.  Revenue rose 4.6% to $16.2. Analysts were expecting 97¢ on revenue of $15.9B.  The credit- card business reported a profit of $171M, up from $138M in the year-ago period. TGT expects full-year EPS to be $4.15-$4.30 & analysts are expecting $4.14.  The stock rose 1.44.

Earnings have been fairly good (DELL aside).  Deere (DE) reported good earnings, but slipped a dime.  Otherwise, this looks to be a quiet day in Aug after the wild ride last week.  Dow is up 200+ this week & down 650 in Aug.  Congress is on holiday which is good & bad.  When it returns next month, arguments in DC about reducing the budget deficit will heat up again.  Every day until then, the deficit grows by more than $4B.