Dow rose 125, advancers ahead of decliners better than 3-2 & NAZ gained 15.  Banks stocks saw selling in the last 2 hours & the lower close for the Financial Index is a negative sign for the markets..

The MLP index fell to just above the former important resistance level but was 35 above the Mon close, while the REIT index was off a fraction to the 218s.  Junk bond funds were a little lower & Treasuries rose, pushing 10-year note yields down the most since 2008.  The chart below shows the plunge in the yield in the last 3 weeks.  Oil advanced after retail sales climbed in Jul.  Gold fell for the 2nd straight day as the jump in retail sales helped temper demand for it as a haven.

INO TV Signup with the latest market update below: The President is conferring with 8 CEOs, including Ursula Burns of Xerox (XRX) &  Johnson & Johnson (JNJ) CEO William Weldon, on ways to boost the economy & create jobs.  They are being joined by Kenneth Chenault, CEO of American Express Co. (AXP), Richard Davis, CEO of US Bancorp (USB), Larry Fink, CEO of Blackrock (BLK), Glenn Hutchins, co-CEO of Silver Lake Financial Management, John Stumpf, CEO of Wells Fargo (WFC), & John Surma, CEO of US Steel (X).  Obama is struggling to jump-start a weak economy, find ways to reduce the 9.1% unemployment rate.  He is “on the hunt” for new ideas about ways to create jobs & will release proposals during the coming weeks.  This is aimed at giving the appearance that he is "doing something" even though new ideas that will change policies are not really expected.


Obama to Meet With Executives on Job Creation, Including Xerox Chief Burnsfin 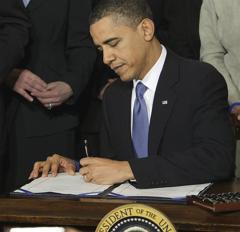 A federal appeals court panel struck down the requirement in Obama's health care overhaul package that virtually all Americans must carry health insurance or face penalties.  The divided 3-judge panel of the 11th Circuit Court of Appeals struck down the so-called individual mandate, considered the centerpiece of the law, siding with 26 states that had sued to block the law.  But the panel didn't go as far as a lower court that had invalidated the entire overhaul as unconstitutional.  The states & critics argued the law violates people's rights, while the Justice Dept countered that the legislative branch was exercising a "quintessential" power.  The decision found that "the individual mandate contained in the Act exceeds Congress's enumerated commerce power."  Obviously this will go to the Supreme Court for a final decision.  A rejected of the law would be a boom for hiring & the stock markets, but that is still many months away (if it overturned).

Brown-Forman, a Dividend Aristocrat with beverages that include Jack Daniel's & Southern Comfort, fell to the 62 yesterday on worries about a weak economy hurting demand.  Today it rocketed ahead 3+ to 68 on expectations of higher demand after this brutal week in all markets.

The postal service announced it is looking to lay off 220K which will be another dent in the total unemployment figures.  The economy is still struggling & was not helped by the unusually wild swings in the stocks markets (& people's wealth) last week.  It is sputtering with prolonged high unemployment that will drag into the presidential electon next year.  European debt problems are not getting better.  Plus there is all the confusion coming out of DC about cutting gov spending, as long as you don't step on my toes.  After all was said & done Dow fell 175 last week, but that does not tell the real story of what happened.  There are plenty of rocks in the road ahead & volatility should remain high.  The VIX was down 2.17 at 36.83 (a very big move) & off the low of 34.