Dow fell 170 (finishing near the lows), decliners over advancers 3-1 & NAZ was down 48.  Bank stocks sold off after the excitement about Buffett buying into a major bank wore off.  On the plus side, it was encouraging to see his substantial investment in the largest US bank.  However fundamental problems relating to sovereign debt issues, a slowing economy & more bank layoffs after Labor Day brought out sellers

MLPs & REIT tagged along with the market decline.  The REIT index fell a fairly large 4½ to the 215s.  Junk bond funds were slightly weaker but buyers were attracted to Treasuries.  Oil was flattish with mixed news on the oil front.  Gold rose after 2 days of sharp declines, as tumbling European & US equity markets sparked by talk that Germany might enact a short-sale ban prompted investors to buy gold as a safe haven.

Homes nearing foreclosure accounted for 12% of sales in Q2 as banks agreed to more transactions at prices below the outstanding mortgage balance.  The proportion of sales of homes in default or scheduled for auction rose from 10% a year earlier & was little changed from Q1.  Most of those were short sales (transactions for less than the mortgage debt).  Total pre-foreclosure deals rose 19% from Q1, while slipping 12% from a year earlier, when a federal tax credit pumped up demand.  Pre-foreclosure homes took an average of 245 days to sell after receiving the initial foreclosure notice, down from 256 days in Q1 & the average sale price was $192K, a discount of 21% relative to non-distressed homes.  Discounts averaged 17% in Q1 & 14% a year earlier.  Sales of distressed properties, which also include homes seized by banks, totaled 265K, down 11% from Q2 2010 & up 6% from Q1. The average price of all distressed homes sold in Q2 was $164K, essentially even with Q1 & almost 5% below a year earlier. Such properties sold at an average 32% discount, compared with a 27% discount in Q1.  It looks like small improvement, but another reminder of the sorry state of the housing industry.
Home Short Sales Jump in U.S. as Banks ‘More Realistic’ on Property Market 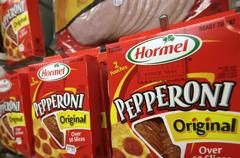 
Hormel, a Dividend Aristocrat, fiscal Q3 net income climbed 15% as it charged more & overseas revenue rose, allowing it to beat expectations.  The outlook for the full year was raised, but there were concerns because unit volume was roughly the same as last year. EPS was 36¢, up from 32¢ last year & revenue rose 10% to $1.9B, beating expectations of 34¢ on revenue of $1.87B.  HRL, like most food makers, raised prices to cope with higher costs for ingredients & packaging.  That produced higher revenue, but sales volume was flat as some shoppers resisted the price hikes.  Revenue from grocery products segment, 13% of total revenue, rose 4% thanks to strong sales of SPAM & Mexican products from its MegaMex Foods joint venture & higher sales of Hormel Compleats microwave meals.  Jennie-O Turkey revenue rose 11% & the unit that includes Hormel Foods Intl reported 35% higher revenue.  Refrigerated foods, more than half of revenue, performed more poorly as revenue rose 10%, but operating profit fell from lower pork margins.  HRL now expects fiscal 2011 EPS of $1.70-$1.75, up from $1.67-$1.73 & analysts predict EPS of $1.71.  The shares fell $2.08, or 7%, to $26.36.
Hormel Foods 3Q profit up, lifts full-year outlook AP

Bank of America stock fell back after the stock market adjusted to the news about Warren Buffett making a large investment in BAC.  The stock gained 66¢ to $7.65 (9%), but closed $1.15 below the AM high:
Bank of America Corp. (BAC) Steve Jobs & Warrren Buffett brought excitement to today's markets.  BAC had a good gain & Apple (AAPL) pared its losses to only 2½ (6 above the AM lows).  There's not much else to say as the markets are panting, waiting to hear Ben's words tomorrow.  Today's sell-off indicates they are not expecting any significant new announcement (like QE2 last year).  Dow bounced off the 10.7K lows, that is holding.  But longer term, the chart is frustrating.

Find out what's inside Trend TV
Click Here
Posted by Avi at 4:46 PM