Dow is up 17, advancers marginally ahead of decliners & NAZ fell 6.  Bank stocks are losing some their early gains.

The Alerian MLP index fell 1 to the 337s (below early gains) & the REIT index was up a fraction in the 217s.  Junk bond funds gained about 1% & Treasuries were lower with the yield on the 10 year Treasury rising 6 basis points.  Oil gained after the Energy Dept reported an unexpected decline in inventories, stockpiles dropped 2.2M barrels.  Gold plunged, heading for the biggest drop in 18 months (down about $150 from its highs 2 days ago), on speculation that financial markets may be stabilizing, eroding the appeal of the precious metal a haven.

Orders for durable goods climbed more than forecast in Jul, as a surge in demand for aircraft & autos eclipsed a decrease in business equipment (including computers & machinery).  Bookings rose 4% (the most in 4 months) after falling a revised 1.3% in Jun according to the Commerce Dept & above a median projection for a 2% gain. Orders excluding transportation category, unexpectedly advanced 0.7%.  Automakers last month rebounded from the slump caused by the Japanese earthquake, while some manufacturers, like Deere (DE), continued to benefit from growing sales in emerging markets. However early surveys in Aug suggest the outlook may have since dimmed.  Orders for motor vehicles & parts jumped 11.5%, the most since Jan 2003.  Orders for commercial airplanes surged 43.4 % in Jul after a 24% slump the prior month.   Boeing (BA), a Dow stock, received orders for 115 aircraft in Jul, up from 48 in Jun.  Orders for non-defense capital goods excluding aircraft, a proxy for future business investment, dropped 1.5%, the most in 6 months, after a revised 0.6% gain in Jun.  Temporary & timing factors were behind the gains, these numbers do not represent a recovery. 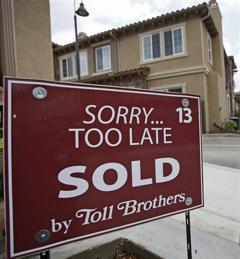 Toll Brothers Q3 net income rose 54%, partly helped by a higher tax benefit.  But the largest luxury homebuilder narrowed its full-year home delivery outlook, as market conditions remain unstable.  EPS rose to 25¢ for the qtr ended Jul 31 from 16¢ in the prior-year period, easily beating the 4¢ expected.  But Q3 included a $38.2M tax benefit compared with a $26.5M benefit a year ago.  "This past quarter's results indicated some continued stabilization in the upscale housing market, albeit at a level dramatically below historical levels," CEO Douglas C. Yearley Jr. said.  Revenue dropped 13% to $394M, below $409M forecasted.  Home deliveries fell 14% to 693 houses, while net signed contracts rose 2% to $407M & the average price of net signed contracts was basically flat at $570K.  The cancellation rate rose to 7.4% from 6.2%, but that it was consistent with pre-downturn historical averages.  Backlog at the end of the qtr was $1.02B, up 8%.  Yearley said the company also has a strong position in some of the more promising US markets, which includes the metro-D.C.-to-Boston corridor and its high-rise business in metro New York City.  "Our sales are gaining some traction, but consumer confidence is still weak and the housing sector remains in a fragile state," Executive Chairman Robert Toll said.  TOL expects to deliver 2475-2675 homes during the year, compared with the prior forecast for deliveries of 2300-2800.  The stock rose 49¢ but is near its 8 year lows.

Angela Merkel, German Chancellor, rejected a breakup of the euro area, saying the currency’s failure would threaten European unity & prosperity built up since World War II.  A return to national currencies by debt-strapped countries such as Greece & Spain, or a German return to the deutsche mark, isn’t a solution to the debt crisis that requires all European countries to commit to austerity, Merkel said. “Do we peoples of Europe want to return to going it alone?” she continued. “Or do we want to move forward together? Are we ready to recommit to Europe and sacrifice more for Europe, so Europe and the euro can survive the severe test it is facing during these months and emerge stronger than before? I’m in favor of us daring to do exactly that.”  But a majority of Germans are wary of bailouts for other euro-area countries & lawmakers in her coalition seek to limit the scope for future contributions by Germany, Europe’s largest economy & the biggest single contributor to the aid packages.  Merkel renewed her opposition to joint euro-area bonds as a way to stem the debt turmoil, saying “they don’t help us at all in the current crisis.” While yearning for a “magic potion” is understandable, that doesn’t mean it is the “politically responsible thing to do.” Sovereign debt problems drone on with Greece getting much of the attention today & solutions remain elusive.


Lethargic markets aren't sure what to do.  Durable goods numbers were mixed & there are growing worries about continued gov deficits for years to come.  European debts represent another major headache.  In pre-market trading, stocks were sharply lower but rose after trading began.  Now averages are around breakeven & look to be heading lower.  There are high expectations for Bernanke to come up with magic when he gives an update on meetings at Jackson Holes on Fri.  Maybe markets are sensing there's is not a lot left that the Federal Reserve can do to pump up the economy.  Even after yesterday's gain, markets remain on defense.

Get your favorite symbols' Trend Analysis TODAY!
Click Here
Posted by Avi at 11:37 AM